Not that he expects to beat the best players in the world, but young South Australian golfer Antonio Murdaca wants a shot at being the leading amateur at next month’s first major championship of the year, the US Masters.

Murdaca and his coach, Gareth Jones from the Glenelg Golf Club in Adelaide have been on a “scouting” mission to Augusta National to give the 19-year-old a chance to acquit himself well when he tees it up in the 2015 Masters. 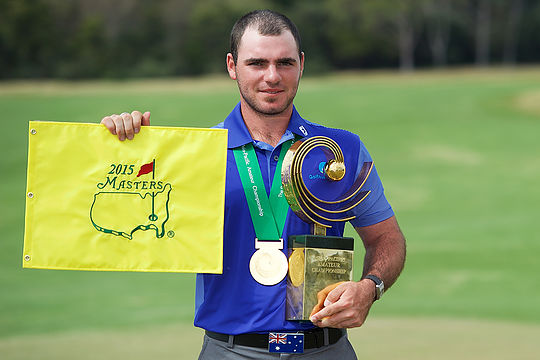 Thanks to his victory in the Asia Pacific Championship at Royal Melbourne late last year, Murdaca sealed a spot in the elite field at one of the most exclusive sporting events in the world.

Now Jones has ensured The Grange golfer gets the chance to show the world some of his talent when he makes his debut on the notoriously punishing course that can make mincemeat of the world’s best golfers – if they have an “off” day.

Jones also walked the course each day to glean as much information as he could about playing the course.

“I’ve done a bit of research through looking at old footage and talking to people and I’ve already been doing mapping from videos I’ve seen,” Jones said.

“We have course maps from Martin Joyce from a couple of years ago when he caddied for Jin Jeong when he was British Amateur Champion.”

“I’ve spoken with a lot of coaches that have previously been involved, like Richie Smith and Oliver Goss from last year, Denis McDade with his guys that have played and Neale Smith the sports psychologist, who has been over there a lot with Hunter Mahan and guys like that.

“I think the course is pretty standard year to year, they have their four or five pin placements it seems.”

“They might vary them on certain days, where they are, but there’s some real traditional pin placements, especially on the last day.”

“The course will be pretty much immaculate I’d imagine, as it always is.”

Murdaca arrived home last weekend for three solid weeks more preparation in SA before he heads back to Augusta for the Masters.

The pair plan to fly back to the US on April 2 for the biggest week of his life.

But Jones will have the young fellow as ready as human hands can make him for the most stringest test of his fledgling golfing life.