Victorian amateur Zach Murray has continued his white-hot form on the ISPS HANDA PGA Tour of Australasia to lead the Isuzu Queensland Open.

Murray equalled the par-71 course record at The Brisbane Golf Club with a round of 6-under 65 in the opening 18 holes of the championship. 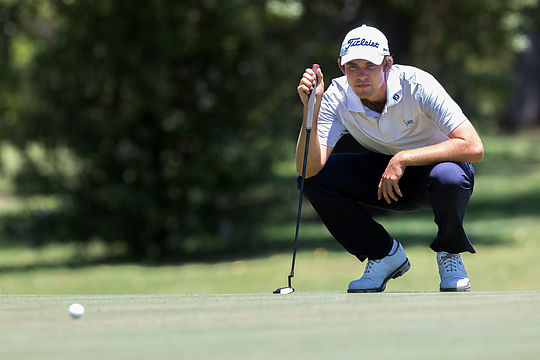 It’s the fifth consecutive professional round the amateur has lead over the last two weeks.

“There was a bit of a sense of calm I had out there today knowing I had the win last week, it just takes a weight off my shoulders,” said Murray.

“I just played sensible golf again, I think I only hit two drivers out there and put the trust in my 2-iron like I did last week.”

“I hit some close shots, I didn’t have to stress about anything which was really nice and I holed a couple of really nice par saves as well.

“I just sort of flowed on from last week not worrying about the score but it’s obviously nice to come out of the blocks fast again.”

Blyth both shot 5-under 66 and Gibson 4-under 67 to sit just shy of Murray in the lead.

“I definitely feel more comfortable playing the professional events then I did last year. I had a couple of solid results last year but nothing near what I did last week,” added Murray.

“So it’s just that feeling of being comfortable. Adam and Rhein were really good today, they’re cracking guys and they both played super steady which just shows how good you have to be to compete out here.”

Queenslander Blyth is hot on the tail of Murray and will be looking forward to playing in his group again after they caught fire on their back-9.

The trio combined for 11 birdies and just the one bogey through holes one to nine, all three recording a birdie on the 9th.

Gibson is tied for third at 4-under the card alongside Jordan Zunic and Kevin Yuan who makes his professional debut in Australia after spending the majority of 2018 playing on the PGA TOUR Series – China.

Becky Kay made history in becoming the first woman to compete in the Isuzu Queensland Open, she shot 4-over to sit in a tie for 96th position.