Australia’s Zach Murray joins local Harry Bateman to be part of a three-way share of the lead alongside Japan’s Tokimatsu on the opening day of the 100th New Zealand Open in Queenstown.

21-year-old Murray shot a flawless round of 63, which included eight birdies and after only a few minutes of preparation. 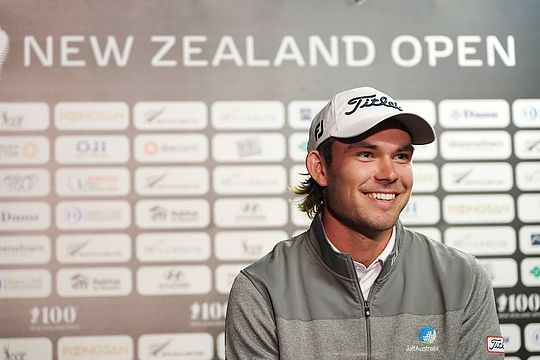 “It was a strange warm up for me. I hit about five balls and I was like ‘I’m not going to get warm’, and so I just sat in the pro shop and waited until the sun came out, hit a couple of putts and off I went,” Murray said.

“I do that back at home when I’m just playing with my mates so I suppose I might have to do that more often.”

Murray turned professional in November after winning the WA Open as an amateur, and finished fourth at Asian Tour Q-School.

His opening round was a nice birthday present for his father.

“(It’s) Dad’s birthday today. He messaged me last night and said 65 would be nice, considering he was born in ‘65, so I added a couple of years onto him today with a 63. I spoke to him quickly just before and he said he doesn’t mind,” added Murray.

Japan’s Kodai Ichihara is in fourth place on 6-under the card, while three players share fourth place on 5-under, including Thailand’s Panuphol Pittayarat and Australians Ashley Hall and Maverick Antcliff.

There are 86 players in red figures with 16 players in a share of 9th on 4-under the card, including US-based Tim Wilkinson and Josh Geary.

One of the pre-tournament favourites Ryan Fox, who arrived home yesterday from playing in the WGC – Mexico Championship, fought off jet-lag to shoot 3-under 69 at Millbrook Resort, defending champion Daniel Nisbet is 1-under the card and the 2000 New Zealand Open winner, Michael Campbell, returning from a six-year hiatus from the game, settled for even par at The Hills.

Fox was not unhappy with his opening round.

“I left a few slip out there but 3-under is not bad looking at the leaderboard and looks like there is some scores to be had at the The Hills. Hopefully, we get a nice afternoon and a little bit warmer which makes is easier to score.”