Commonwealth Golf Club’s Zach Murray has secured the 2017 Golf SA Amateur Classic with a 6-under par total to claim his first main amateur title since winning the 2015 Australian Master of the Amateurs at Royal Melbourne.

Murray carded rounds of 73, 72, 68, 69 to finish one ahead of three players tied at 5-under including Western Australian’s Min Woo Lee and Ben Ferguson and overnight leader Douglas Klein.

Murray maintained his composure though, playing error-free golf all week, recording no double bogeys for the championship and was one of only four players to shoot sub-par final rounds in tricky conditions around Royal Adelaide’s championship course.

“I was pretty happy, I was a little bit nervous on the last hole but it was good to get up and down with the ball ricocheting off Sam’s ball from the bunker,” said Murray.

“I got a little bit lucky there, but you take them when you get them I guess, they don’t come very often. I’ve been playing relatively well over the last three of four months, I came second in the Master of the Amateurs and made the cut at the Australian Open in November so I have been playing pretty good, so it was good to get a win today.” 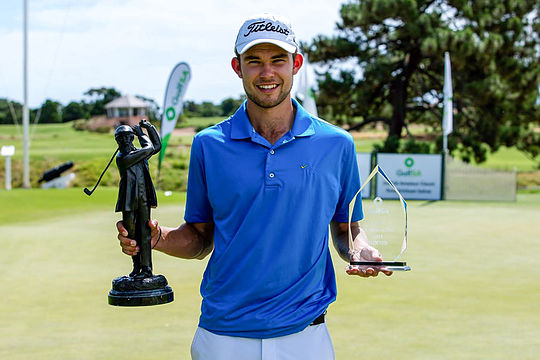 Three years ago Murray became the second youngest men’s champion with a gripping 1-up victory over the seasoned player Todd Sinnott at the Victorian Amateur.

Add to the mix a number of match play wins as juniors over the much touted Ryan Ruffels, who has since turned pro, and a string of recent strong performances by Murray this season, Friday’s win was timely and a sign of things to come.

Currently sitting 109th on the World Amateur R&A rankings, Murray will be seeking to get inside that much desired top-50 as soon as he can.

The Victorian was also recently named the Men’s captain for the state team which will contest the Australian Interstate series in May at Melville Glades Golf Club in Perth.

Western Australian Kiran Day finished outright 5th with four rounds of 71 while SA’s Lachlan Barker from Glenelg Golf Club fired an even par final round to finish 2-under and tied sixth.

Becky Kay from Queensland took out the 2017 Rene Erichen Salver by three shots, finishing the 72 hole tournament at 5-under.

Kay started the day at 4-under, two clear of Western Australian Kathryn Norris who started the day the better of the two, catching Kay by the seventh hole. Back to back birdies on eight and nine to Kay and a dropped shot to Norris, suddenly extended Kay’s margin out to three at the turn, with Victorian Montana Strauss five back.

Kay closed out the championship with two pars finishing with rounds of 71-73-71-72.

Norris finished second with rounds of 70, 73, 74, 73 and at 2-under with Queenslander Karis Davidson, who won the Riversdale Cup a few weeks back, third at even par.