Australian Zach Murray will take a five-shot lead into the weekend at the 100th New Zealand Open, but local Kiwi favourite Ryan Fox is intent on running him down.

Murray continued where he left off in the opening round, clearing out from a share of the overnight lead with confidence which belied his rookie professional status. 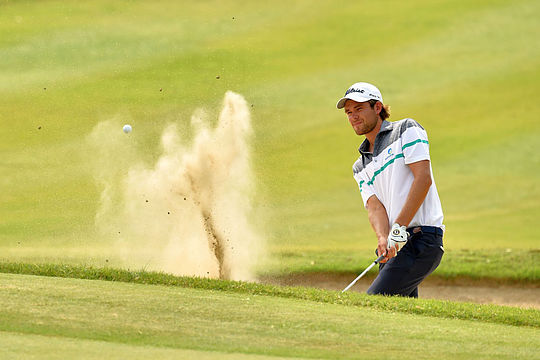 An eagle-birdie start helped the 21-year-old to a 7-under 65 at The Hills to be 15-under for the tournament, which will be based at The Hills for the final two rounds.

“I did not feel too much pressure. I slept like a baby last night,” Murray said.

“You can dare to dream about (winning this event) but it does not help the cause too much. Obviously, you know what is at the end of the four days but I am playing well.”

Playing The Hills, Fox strung three birdies in a row together on the back-9 to mount a case for the weekend, before hitting a speed bump on the 17th.

Helping to guide him around the course, Fox has renowned caddy Steve Williams working with him as the pair both search for a New Zealand Open title.

“I have the best bagman in the world with me and he keeps you in the moment very well and we did that well today,” added Fox.

Papadatos, who claimed his maiden professional win at the 2014 New Zealand Open, was initially just happy to be playing in Queenstown after suffering from a nagging wrist injury, but will now have loftier ambitions after a 5-under 66 at Millbrook.

The second round cut was made at 3-under the card with 60 professionals and two amateurs making the weekend rounds.