Kevin Na birdied four of the first eight holes and shot a 4-under 66 for a four-shot victory over Tony Finau on Sunday to win the Charles Schwab Challenge on the PGA Tour.

The victory came after Na put himself in contention with a second-round 62, one off the Colonial record. That low round was a year after tying that course-record 61 in the final round to finish fourth.

Na’s 2019 season had been a bit up-and-down, but with his triumph at Colonial, he now has three wins for his career, including two in the past year. The 35-year-old’s previous two victories were at the 2011 Justin Timberlake Shriners Hospitals For Children Open and the 2018 A Military Tribute at The Greenbrier.

Na opened the day with a two-shot lead over a group of five that included local favourite Jordan Spieth, Jim Furyk and Tony Finau, but Na played the front nine in 3-under and made the turn leading Finau by three.

A bogey at 10 took his lead to just two, but Na held his nerve to secure the victory. 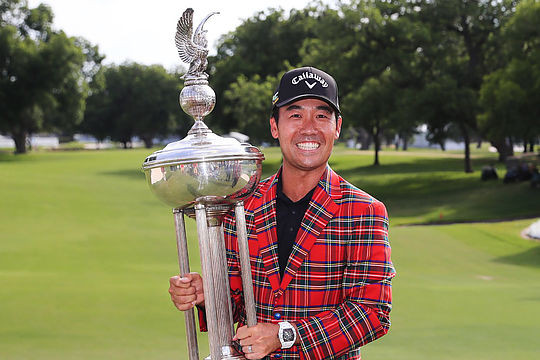 “I knew this is one of the places I can definitely win, and I really look forward to coming here, having a chance,” said Na. “To be able to do it today, it’s a great feeling.”

“I think after the win at Greenbrier last year was a very emotional win. I feel like this week was the next chance at a win, next time I legitimately could contend and I won. I felt so much more comfortable. Had much more confidence.”

Spieth’s reputation as being a strong putter disappeared in a final round 2-over 72 as he finished eight shots back to remain without a victory since the 2017 Open Championship.

Yet the signs are there that Spieth’s game is on the up. He tied for 3rd at last week’s PGA Championship before this week’s tie for 8th. It’s his best consecutive weeks since the 2018 Houston Open (tie for 3rd) and Masters (3rd).

Defending champion Justin Rose, who won by three last year and was the highest-ranked player in the field at No. 3 this year, had his third score of par or worse, shooting 70 to finish 5- over.

Australian Aaron Baddeley jumped five places to finish tied 48th after finishing his final round with an even-par 70 to be the best of the Australians. Matt Jones and Rod Pampling missed the weekend.

Na received considerable attention after sharing the spoils for the victory as he parted ways with a 1973 Dodge Challenger, which was part of the winner’s handouts for the 2019 edition of the Charles Schwab Challenge, gifting it to his caddie Kenny Harms.

“He and I have an 11-year relationship,” said Na after the winner’s ceremony. “We are like brothers, and I’m more than happy to give it to him.”