Kevin Na has claimed victory at the Sony Open after birdieing the final hole for a one shot victory over Chris Kirk and Joaquinn Niemann in Hawaii.

After making the Tour Championship last season, Na was without a top-10 finish in six starts this season, though he had made all but one cut. Na now moves up to No. 23 in the world and is eyeing off a possible spot on the US Ryder Cup.

Na entered the final round two shots back of Steele, but as Steele struggled off the tee down the stretch, Na made his move with birdies on the 13th, 14th and 15th to take the lead, and then got up and down from behind the 18th green for another birdie to break a tie with Kirk.

“It feels great,” said Na about his fifth PGA Tour win and his first since the Shriners Hospitals for Children Open back in 2019.

What’s In The Bag: Kevin Na

Born in South Korea, Na emigrated with his family to the United States when he was eight years old, settling in southern California. Na has played on the Asian Tour with a win at the 2002 Volvo Masters of Asia and the Nationwide Tour where he won the Mark Christopher Charity Classic in 2006. 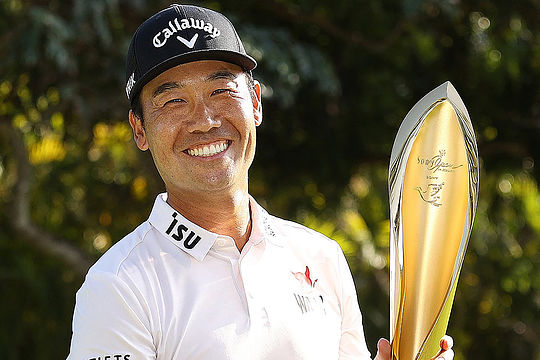 Marc Leishman finished the best of the Australians with a share of 4th position at 19-under, two shots short of Na. Leishman, who began the day in a share of ninth, was even par at the turn in his final round but charged home to shoot 30 on the back nine.

Earlier Leishman carded a third successive round of five-under 65 to set the clubhouse lead at 19-under, along with Webb Simpson before Na made his charge.

“I’m pretty disappointed with that but it’s still a good week after the way I’ve been playing the last six or eight months and nice to get a sniff of the lead again,” said Leishman about his finish.

Leishman was looking for his first PGA Tour win since the Farmers Insurance Open in January 2020.

The 37-year-old Aussie has five PGA Tour victories to his credit since turning pro in 2005 with his best finish at a major coming at The Open Championship in 2015 at St Andrews where he finished in a tie for second. Leishman won his first PGA Tour tournament after 96 starts in June 2012 at the Travelers Championship.

Matt Jones was next best of the six-strong Aussie contingent to make the cut with his own six-under 64 shooting him up to 17-under and tied 11th.

Cameron Davis finished at 13-under and in a share of 31st place, Adam Scott and Aaron Baddeley closed their weeks at 11-under while defending champion Cameron Smith finished tied for 62nd.