American Kevin Na has won the Shriners Hospitals for Children Open in a playoff after Patrick Cantlay three-putted the second extra hole to record his fourth PGA Tour victory.

After being in control of the tournament most of the week, Na was forced to make his move late on Sunday after making a triple-bogey 7 on the 10th hole to secure his victory in a thriller of a finish.

Earlier Na enjoyed a four shot lead after the opening nine which quickly vaporised with his error on the 10th. Then on the par 5 16th, Na’s second shot found the water which resulted in a bogey to relinquish his lead. But it was Na’s putter all week that had saved him and again on the 17th Na tied things up when he drained a 7 metre putt for par while Cantlay made bogey.

Both made birdies on the first playoff hole with Na from three metres and Cantlay from the same distance. On the second extra hole, Cantlay three-putted from 13 metres, while Na ran his 8 metre putt to a metre by the hole before making the comebacker for the victory.

Na’s final putt was no gimme but with nerves of steel he calmly rolled the ball into the hole.

“I’m a fighter. I never gave up,” said Na. “I knew that I could make that putt and stay in it. I was zoned in and looking at nothing but making it.”

“Putter got hot this week. Tends to do that sometimes, and when it does, if I’m hitting it halfway decent I feel like I can win.”

It was Na’s third victory in the last 15 months, and third in as many seasons on the PGA Tour. A Las Vegas local Na joins Jim Furyk as the only multiple winners of this event. 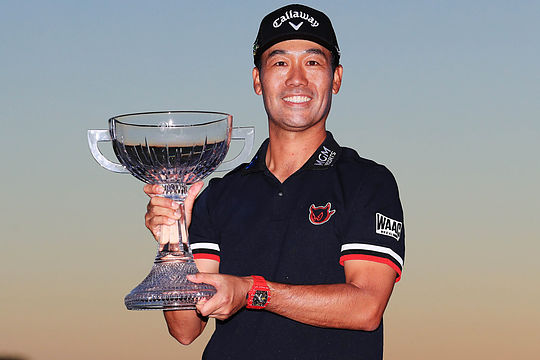 Pat Perez closed with a 68 to finish outright in third position for his best result since he won in Malaysia two years ago.

Cameron Smith finished the best of the Australians at 17-under for a share of 13th place in his third start in Las Vegas which earned him his second consecutive top-10 after a tied 10th in 2016 and a missed cut in 2015. The result was Smith’s best finish since a tied 12th result at the 2019 WGC-FedEx St. Jude Invitational in July.

Matt Jones finished at 14-under-par to share 29th position along with amateur Jack Trent, who originally hails from Queensland’s Sunshine Coast, becoming the first amateur to make the cut at the Shriners Hospitals for Children Open, after earning a spot in the field by winning the Southern Highlands Collegiate in a three-hole playoff.

After starting the tournament with rounds of 66-67-65 to sit tied 8th through 54 holes, Adam Scott struggled with a 3-over 74 in the final round to finish in a share of 42nd position.