Two pairs finished the day on 94 points after 36-holes before heading to a sudden-death play-off. 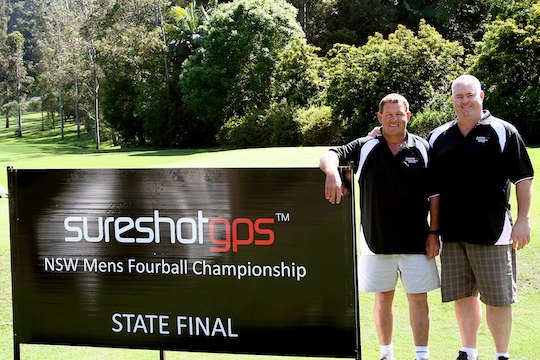 Fred Pawlak and Bruce Pope from Charlestown Golf Club took on Mark Hoath and Shane Swansborough from Coonamble Golf Club in a showdown for the crown and both pairs had to head back to the 18th tee for the playoff.

In the end it was the composure of Swansborough on the green, sinking a four-foot putt when it mattered to secure victory for the Coonamble pair.

Swansborough described the win as “an incredible thrill for a couple of blokes from out west”.

“It was a fantastic couple of days of golf, and we were just so pleased to even be here, but to win is just something special,” Swansborough said.

For a town that’s best known for singer Shannon Noll, the pairing are now considered ‘local heroes’ in Coonamble, with their victory dominating the local paper and news, and a plaque and frame being erected in the town’s golf club.

It was a fitting finish to an event which saw more than 19,000 competitors compete at more than 250 clubs in the initial club qualifying rounds.

From there, district and metropolitan play-offs narrowed it down to 20 metropolitan and 20 country pairs to contest the State Final at Bonville.

For the runners-up from Charlestown, Pawlak and the spritely 80-year-old Pope, it was still a victory, with the pair playing consistent golf, shooting 47 on each day, and thoroughly enjoying the golf and social activities.

A good score on the final day of 48, to go with their 44 from the first day, for a total 92 for Ban Nee Lim and Tony Moody from Concord Golf Club, saw them finish third overall.

Coraki Golf Club pair Tony Clark and Adrian McGrath held a sturdy six-point lead at the end of play on the first day of the championship, with a great score of 54.

Chasing them hard were Jem Kokcek and Douglas Sadovy from Ashlar Golf Club, who ended the day on 48.

With the subsequent disqualification of Clark and McGrath (Coraki GC), it left the championship wide open for a number of pairs to contest for the title. A seeded draw for the second day saw it come right down the final pairings finishing their round to determine the winners. In an exciting finale, the sudden-death play-off was required to determine the champions.

Despite heavy rainfall in Coffs Harbour in the days leading up to the championship, the weather was spectacular for both days, allowing the course to dry out and provide perfect conditions for play.

This was the first year of a three-year deal that Golf NSW has with the fantastic Bonville Golf Resort to host this event.

Activities kicked off on Tuesday, October 12 with a welcome barbecue for the players before they took to the course on the Wednesday and Thursday.

A social dinner and chipping competition was on offer on the Wednesday. The event concluded with a presentation dinner on Thursday night to reward players for their efforts and to provide a festive finale to a fantastic event.

Full results, prize winners and images can be found at www.golfnsw.org.

The 2011 sureshotgps NSW Men’s Fourball Championship will kick off on January 1, 2011.

Information packs will be sent to all clubs this month [December], so start planning your club’s qualifying round now.