Kevin Na fired a 6-under-64 on Sunday for a five-stroke victory at the Military Tribute at The Greenbrier for his second career PGA Tour victory and first since 2011.

Starting the final round one stroke behind co-leaders Harold Varner and Kelly Kraft, Na birdied six of his first 10 holes to open a commanding lead on the Old White TPC, and held on from there finishing at 19-under-par for a five stroke win over Kraft.

Brandt Snedeker and Jason Kokrak tied for third at 13-under-par.

“I wasn’t sure if it was going to come again. I was hoping it would — sooner than later,” said Na. “I’ve been close so many times, failed so many times.”

“My putter got hot,” said Na. “The first day the putter felt awful, and (then) it just clicked. Every time I got over the ball it felt great, and everything felt like it was going in.” 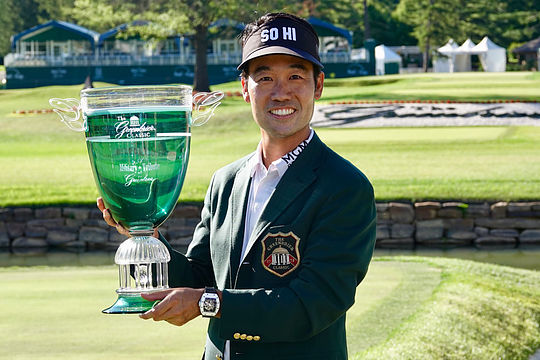 The victory gives Na four finishes of T6 or better this season, and will put him well over the US$2.5 million mark in season earnings. It also makes him an interesting candidate for the US Ryder Cup team, as he now ranks 13th in the standings.

Kraft, who posted a final-round 70, ended his round on a strong note with a birdie at the 18th, and with the runner-up result secures a spot in The Open Championship. It’s the second runner-up finish of his career, the first coming last year at the AT&T Pebble Beach Pro-Am.

Born in Seoul, South Korea, Na emigrated with his family to the United States when he was eight years old, settling in southern California before turing professional at 17 years of age.

The victory was Na’s fifth worldwide since turning professional. His other wins coming at the 2002 Volvo Masters of Asia on the Asian Tour, the 2006 Mark Christopher Charity Classic on the Web.com Tour and a victory at the 2002 Long Beach Open.

Cameron Percy was the only Australian to make the weekend and finished in a tie for 56th position at 2-under-par.

Robert Allenby missed the cut for the third time in five appearances this season on the PGA Tour, his two round total of 4-over-par ending his chances.

Steven Bowditch was another who struggled again – carding 5-over-par to miss the cut for the fifth consecutive PGA Tour tournament.

Matt Jones missed the cut for the second consecutive week after a tied 19th finish at the Travelers Championship, whilst Geoff Ogilvy fired 8-over-par to miss the weekend for his third consecutive time this season.