Her sister Jessica won the last tournament on the LPGA Tour schedule and now the 22-year-old Nelly Korda has taken home the prize money at the Gainbridge LPGA for her fourth victory on the LPGA Tour since joining in 2017.

Korda, who finished on 16-under, held off Lexi Thompson and New Zealand’s Lydia Ko, who shared second place and three shots off the pace. 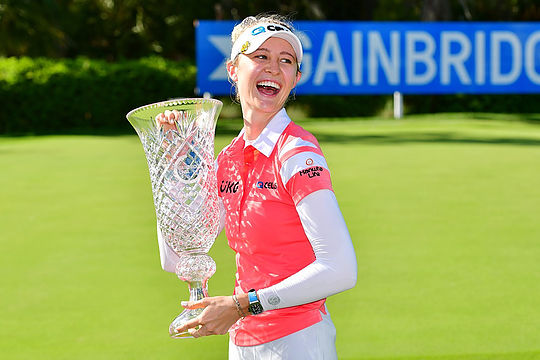 Aussie Sarah Kemp played four rounds of solid golf to record one of the best weeks of her career on the LPGA, finishing in a tie for 5th for the fifth top-10 finish of her career.

Rookie Gabi Ruffels, who was playing her first event as a pro, fired rounds of 73-70-71-72 to finish in a share of 36th position to collect her first pay check totalling $US11,197.

Ruffels is currently without status on any tour as the annual Q-School Series was cancelled last year. To earn her LPGA card and avoid Q-School, Ruffels will need to either win an LPGA event or earn the equivalent of the top 40 on the CME points list by season’s end.

Annika Sorenstam went more than 12 years without playing on the LPGA Tour before making the weekend cut at the Gainbridge LPGA.

Sorenstam, a 72-time LPGA winner who retired after a three-win season in 2008 to start a family, described her attendance as an “appearance”, as opposed to a “comeback”, indicating that she wanted to play some competition rounds as she contemplates appearing at this year’s US Senior Women’s Open in August.

Saturday and Sunday didn’t necessarily turn out the way the 50-year-old World Golf Hall of Famer had hoped, rounds of 79-76 dropping her to 74th, 29 shots back of winner Nelly Korda, after opening with a 75-71 to make the cut right on the mark at Lake Nona, her home course.

“I’m just thankful for being here, playing here and being able to make the cut,” said Sorenstam. “I never gave up, even though it was not really going my way and I wasn’t hitting as well as I should be to be out here. The purpose was to get some tournament rounds, and I did that.”

That Sorenstam made the weekend after such a long absence from the game was impressive. The Swede has indicated that there are no further plans to play another LPGA Tour event, but admitted some more ‘tournament play’ will be ideal leading into the US Senior Open.

“I’m happy where I am,” said Sorenstam,

“It’s taken a lot of courage to come out here and I applaud myself for that. I need to work harder and I don’t know if I have that and I don’t really know if I want to do it. I mean, I don’t want to wait four months and here I go back to square one again.”