New changes for Master of the Amateurs

It is every tournament promotor’s dream to have a solid sponsor and in Peter and Angela Mann’s case the announcement last Friday that Asahi had become one of the principal sponsors for the Australian Master of the Amateurs was stellar news.

Before a business luncheon at RAVC in Melbourne, Mann announced a number of changes to the only Category A amateur event as sanctioned by the R&A played in Australia. 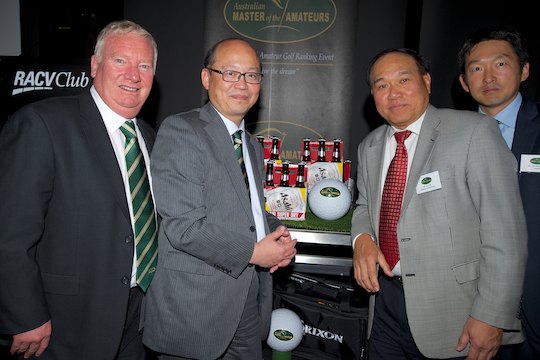 The tournament is by invite only and a new stream of qualification has been introduced to be known as the “Schweppes Club Champion Qualifier”, whereby Club champions throughout Australia will play for one spot in the 2015 field.

“We’ve added another level of qualification to enable the club golfer to compete against the best amateurs in the world,” said Mann.

“This will enable those clubs with Schweppes accounts to enter their club champion to compete for a place in our field.”

Mann also announced that a new arrangement had been reached with the Japan Golf Association which will see that countries top-2 players gaining invites.

“Golf in Japan is massive and we have taken advantage through our many contacts to expand the depth of the field by inviting them to send their two best players,” said Mann.

China continues to produce amazing talent and this year Ye Wocheng has been confirmed to play.

Ye Wocheng was 12 years old when he played Qmega European Masters and in the process set the world recorded of being the youngest player to play on the European Tour.

“This event continues to get bigger and better,” says Mann.

“We are the only category A event in this country and we are continually striving to improve the tournament by widening the field and attracting the best overseas players to The Royal Melbourne Golf Club.”

Michael Johnson Dogwood Invitational Champion is confirmed to play and Chinese Taipei has confirmed it will send Chieh-Po Lee and Yu-Jui Lui.

The Australian Master of the Amateurs takes place 7 January at The Royal Melbourne Golf Club.