New reality faces Woods in his return to PGA Tour

15-time major champion Tiger Woods returns to competition this week for the first time since the PGA Tour’s return to golf insisting he will miss the energy of not having any spectators in attendance at the Memorial.

Woods has not competed in a regular Tour event since last February when he ended near the field in hosting the Genesis Invitational at the Riviera club near Santa Monica. 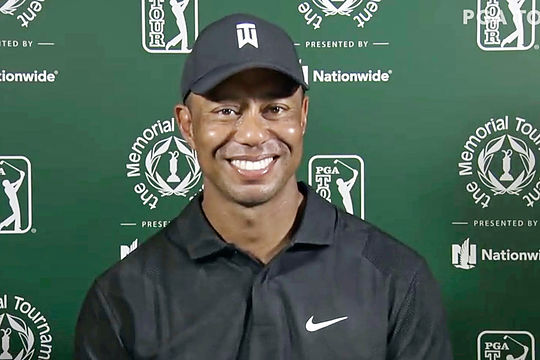 “I’m always excited. I’m always nervous to get out there and play and hit my first tee shot,” said Woods ahead of his PGA Tour return.

He did compete in a ‘made for TV’ exhibition match as his home Medalist Club in Florida while this week will also be Woods’ third event of 2020 after sharing ninth place earlier in February at the Farmers Insurance Open.

And it’s an understatement is stating how much has happened since the reigning Masters Champion walked onto the first tee with a Tour scorecard in his back pocket.

And one of many questions asked of Woods ahead of this week’s Memorial, an event he’s won on five occasions, was what will be his reaction to having no fans on course for a golfer who has competed for all his golfing life surrounded by supporters.

“It’s going to be a lot more difficult. I just think that the energy…even it felt weird as I was watching on my computer at home, like 14, when Collin (Morikawa) last week hit the ball on the green there…that same situation during a Memorial event, to have someone drive the ball on the green that close to the hole, I mean, that whole hillside would have been going nuts,” said Woods.

“Then to see J.T. (Justin Thomas) make that putt, he’s screaming, but no one else is screaming. And then when Collin makes it, normally — he didn’t have that much of a reaction, but the whole hillside on 18 would have been just erupted.”

“I’ve been there when they’re throwing drinks towards the greens and people screaming, high fiving, people running around, running through bunkers. That’s all gone. That’s our new reality that we’re facing.”

So how does the current World No. 14 adapt to life without that ‘energy’?

“I think for me in particular, I’m going to have to just put my head down and play,” he said.

“But it’s going to be different, there’s no doubt about it. For most of my career, pretty much almost every competitive playing round that I’ve been involved in, I’ve had people around me, spectators yelling, a lot of movement inside the gallery with camera crews and media.”

“For some of the younger guys it’s probably not particularly different. They’re not too far removed from college or they’ve only been out here for a year or two, but for some of the older guys it’s very eye-opening really.”