(Abu Dhabi, UAE:) Newly-married Jason Scrivener celebrated his very first round of the New Year in posting a sizzling six-under par 66 on the opening day of the Abu Dhabi HSBC Championship.

Perth-based Scrivener’s score, in his fourth straight appearance in the Abu Dhabi event, handed him a share of third place alongside World No. 1 Brooks Koepka, who is playing in his first tournament back since being sidelined by injury last year. 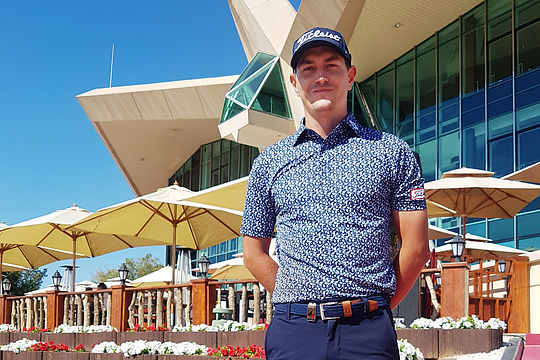 The duo were just two shots adrift of the leading duo of Italian Renato Paratore and South African Shaun Norris who signed for eight-under par 64s in ideal scoring conditions.

Scrivener was out in the fourth group of the day contesting the $US 7m Rolex Series event and got off to a brilliant start with three birdies straight off the bat.

The West Australian then birdied the sixth hole, the 13th and then the par-5 18th to end his round at that time lying second behind Parartore, who was in the group ahead of Scrivener.

Scrivener clearly likes the National Course in the UAE capital having shot a best score a 65 on day two of the tournament a year ago while he’s also benefitted from working on his game over the Festive Season training at the Meadow Springs club in Mandarah.

“This is my first event of the New Year and I played great, so very happy with a 66,” he said.

“I really like the course and I’ve come back to competition after a pretty decent break that included getting married in Perth.

“It was nice to switch off and think of something else other than golf for once.

“Aside from all the marriage preparations, I’ve been working hard on my game at Meadow Springs south of Perth in Mandarah where we live, so that’s been a great help.”

And it is not lost on the 30-year old Scrivener, and current World No. 148, the success being enjoyed by Australian golfers around the globe, including Wade Ormsby who captured last week’s Hong Kong Open and Cam Smith at the Sony Open.

“With Aussie golfers now doing well around the world we all can feed off that,” said Scrivener.

“The last couple of years has not been that amazing for Australian-born golfers in Europe as it’s been a real dry spell but you look at this 2020 season and there will be a lot of Aussies competing.

“You have the likes of Spain’s Sergio Garcia and Jon Rahm helping to inspire the Spanish and now we’re seeing Adam (Scott) win again just before Christmas and then last weekend Cam (Smith) wins on the PGA Tour and later the same day Wade (Ormsby) won again in Hong Kong.