Newly-wed Jiménez reigns in Spain at 50

Crowd favourite Miguel Angel Jiménez fulfilled a lifelong ambition and made giant strides towards his dream of being selected in this year’s European Ryder Cup team by winning his home country national championship – the Open de España.

In the process, he extended his own record as the oldest champion in European Tour history, but winning his national title in his 27th attempt was the ultimate for the 50-year old newlywed. 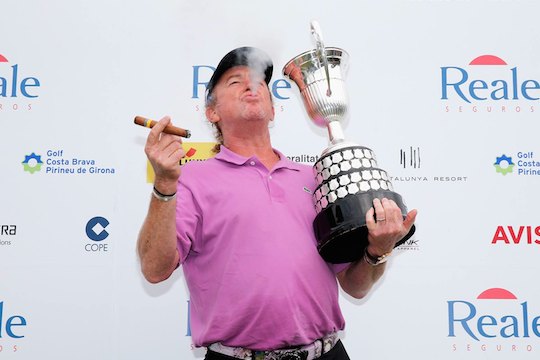 “There’s no words to describe what it means to me, you need to be into my skin but I’m not going to let you!” Jiménez said. “It’s amazing.”

“It’s my 21st victory on The European Tour and 27 times I played the Spanish Open. I have been close a couple of times. Today it was very tough out there but I got it in the end.”

Australia’s Richard Green and Belgian Thomas Pieters tied with the Spaniard at four-under par fter regulation play and the trio returned to the par-four 18th to determine the outcome of the championship.

All three players struggled but Jiménez almost holed his chip from the back of the green for a birdie. His par would prove good enough as Green failed to get up and down from over the green, while overnight leader Pieters was short of the green and saw his par putt to extend the playoff, lip out.

Jiménez has now won 21 European Tour titles, 14 of them since he turned 40, and extends his magical run since finishing fourth in the Masters and winning on his Champions Tour debut the following week.

The Open de España was Jiménez’ first event back since his marriage in early May and he becomes the first multiple winner of the current season in Europe.

Green’s chances looked to have disappeared when he ran up a triple-bogey seven on the 14th but he bounced back immediately with birdie at the 15th and was given a chance at victory when both Pieters and Jiménez bogeyed the 17th.

Although disappointed at losing, Green’s 10th runner-up finish on the European Tour was his best performance in almost 12 months.

“I have to take a lot of positives out of it, it’s the best I’ve played since the French Open last year,” the 43-year-old said.

“I played well in the Australian Open over Christmas, just unfortunately struggling to get the job done. I couldn’t count how many times I have run second on The European Tour.”

Jiménez’s win leaves him just outside the automatic Ryder Cup qualifying places and boosts his chances of a return for the first time since 2010.

Should he succeed, he would become Europe’s oldest ever player surpassing Ted Ray who was 50 years, two months and five days old at the inaugural contest in 1927.

He is also expected to rise to inside the Top 25 in the Official World Golf Rankings.

“I would love to make The Ryder Cup team, I would break all the records at 50,” added Jiménez.

“I hope I can make the team and defend the European colours in Scotland.”