The Faldo Series, a global amateur event for boys and girls established by six-time major winner Sir Nick Faldo back in 1996, is coming to Australia.

With over 40 tournaments taking place in over 30 countries worldwide, Australia has been added to the schedule with the inaugural Faldo Series Australia Championship due to take place at Sydney’s Castle Hill Country Club on 12 – 13 January 2015. 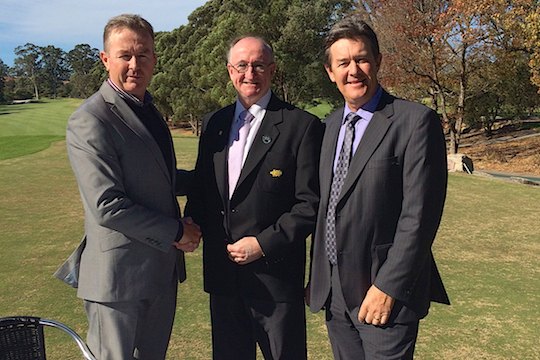 Patrick Young, David Geraghty and Lindsay Verdon at the Official Signing in Sydney

Winners of each age group category will earn the chance to emulate past winners like Rory McIlroy and Yani Tseng in the ninth Faldo Series Asia Grand Final at China’s Mission Hills in March.

“Australia is one of the world’s great golfing countries and I’m thrilled that the Faldo Series will be staging an event there,” said Britain’s greatest ever golfer.

“Last month we announced that New Zealand and Bangladesh were joining the Faldo Series. The addition of Australia further underlines my commitment to developing junior golf around the world.”

A host to professional tournaments over the years including the Australian PGA Championship and Canon Challenge, Castle Hill will play host to the Faldo Series Australia Championship for three years.

Club President David Geraghty said “At Castle Hill Country Club, we have a great interest in securing the future of our game through the development of junior golf. We are, therefore, thrilled to be partnering Sir Nick Faldo, one of the legends of the game, by hosting the Faldo Series Australia Championship.”

“The course will certainly offer all participants a great test of nerve and skill. Castle Hill Country Club members stand right behind Sir Nick Faldo in furthering his aim to ensure the viability of the game through the development of our junior champions.”

“The event promises to be very exciting and is certain to be well supported by the clubs’ members and the Sydney metropolitan community.”