Nicklaus edges out Woods in virtual Open For The Ages

It was a close tussle all the way but it was Jack Nicklaus who eventually edged out Tiger Woods in The Open For The Ages, a virtual initiative from the R&A to help plug the hole left by the cancellation of this year’s 149th Open Championship due to COVID-19.

Nicklaus, who won the Open Championship in 1966, 1970 and 1978, claimed the virtual trophy by a shot over three-time champ Tiger Woods, finishing at 16-under and 15-under respectively on the Old Course at St Andrews.

Nicklaus, who won two of his Open title at this course, trailed Woods by just a shot with three holes to go before a birdie at the 16th put the Golden Bear back into a share of the lead.

Woods, who was paired alongside Nicklaus in the final group, bogeyed the 17th after missing the green to the left. The lead swung Nicklaus’ way when Woods bogeyed the 17th and two closing pars from the Golden Bear was enough to get the job done with Woods missing an outside chance at birdie on the 18th hole.

Seve Ballesteros took outright third place on 14-under, with Tom Watson and Nick Faldo a shot further back in a share of 4th place. 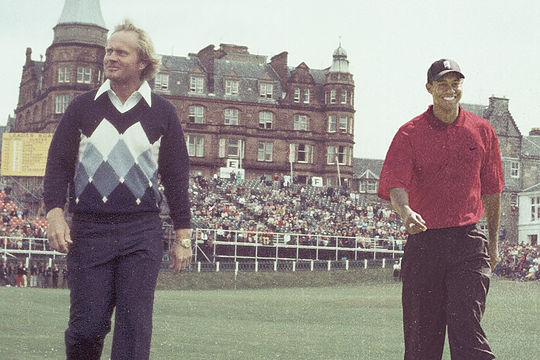 Two-time Open winner Greg Norman was the best of the Australians in outright 12th place following a final round 5-under 67 while 5-time title holder Peter Thomson closed the tournament in a share of 18th alongside Fred Couples and Gary Player.

So how was this world first virtual Open Championship created?

“The Open For The Ages used real archive footage to create a fictional Championship at St Andrews featuring the greatest players of the last 50 years. Yet before work could begin on piecing this innovative programme together, a winner of the event needed to be determined,” said the R&A.

“A model developed in partnership with NTT DATA, an Official Patron of The Open, analysed a combination of historical data sets, including metrics such as players’ overall career records and their performances at The Open and a weighting was then applied to results at St Andrews, the venue for The Open For The Ages.”

“Statistics such as career wins and scoring averages, both in The Open and specifically at the Old Course, were also factored in.”