Jack Nicklaus set the tone with his own sporting tribute to an old friend.

And it lasted right through until Sunday at the US Masters when good friends Sergio Garcia and Justin Rose went at it with high-fives and pats on the back for the final round at Augusta National, until Sergio prevailed. 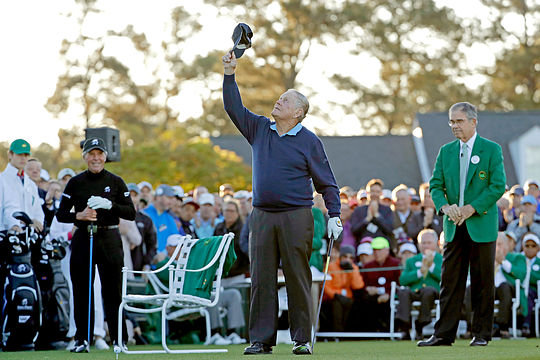 It’s what sets golf apart from just about every other sport – players pulling for each other – even when they’re trying to beat them.

And no-one has been a greater benefactor of the game than Jack Nicklaus, who paused before hitting the opening tee-shot to launch the 2017 Masters, just so he could pay tribute to his old friend and combatant, the late, great Arnold Palmer.

It was exactly 12 months previously that an obviously ailing and pale Palmer sat in his chair on the first tee as he watched Nicklaus and Gary Player do their ceremonial launch with a tee-shot each.

The chair was still there this year but vacant following Palmer’s passing, at the age of 87.

Player, 81 was introduced on the tee before Nicklaus stepped forward, and with the now 77-year six-time Masters winner tipping his cap in the air and wiping a tear from his eye before smacking his drive down the fairway.

There was not many watching on who did not have to wipe away tears.

No-one really cared where those tee-shots finished – the Masters was under way and this was the first time since 2006 that the golfer we all knew as The King, was not alongside either Nicklaus or Player to launch the event.

Masters chairman Billy Payne carried Palmer’s green Augusta National member’s jacket to the tee and placed it on the chair.

“Arnold was my dear friend, and he was your friend, as well,” said Payne.

Gary Player agreed: “When he [Palmer] sat on the chair last year and they called his name, you know, a lot of people don’t stand up.”

“But Arnold could hardly walk to the first tee and he stood up because he had been taught to stand up,” said Player.

“He gave a little wave, and that was very touching to me, and I could see him doing it in that chair today,” he said.

In an added gesture, all patrons as well the vast media contingent covering the Masters, were handed special Arnold Palmer commemorative badges that read: “I am a member of Arnie’s Army.”

That prompted Nicklaus to joke that Palmer “would have dropped over if he had seen one on Gary and me. [But] it was very nice.”