Chilean Joaquin Niemann has secured his second PGA Tour Title after winning the Genesis Invitational on Sunday at Riviera, closing with an even-par 71 to defeat Collin Morikawa and Cameron Young by two shots.

Niemann, who finished on 19-under took the event wire-to wire after opening with a 63 and continued with rounds of 63-68-71 setting new PGA Tour scoring records in the process.

“This weekend I was just thinking about I want to win, I want to win. I think it’s going to give me a lot of confidence for what is coming next.”

Niemann’s win at Riviera Country Club didn’t just mark his first title since winning the 2019 Greenbrier Classic, but it also pushed him to over US$12 million in career earnings. Niemann’s US$2.16 million winner’s cheque, by far the biggest of his career, pushed him to US$12,317,781 in 98 events as a professional.

With the win he’s also moved to 20th in the world rankings. Niemann, 23, was previously the number one ranked golfer in the World Amateur Golf Ranking for 44 weeks from May 2017 to April 2018, when he turned professional.

So far this season Niemann has made the cut in six of his eight tournaments and recorded two other top-10 finishes at the Farmers Insurance Open and the World Wide Technology Championship at Mayakoba. 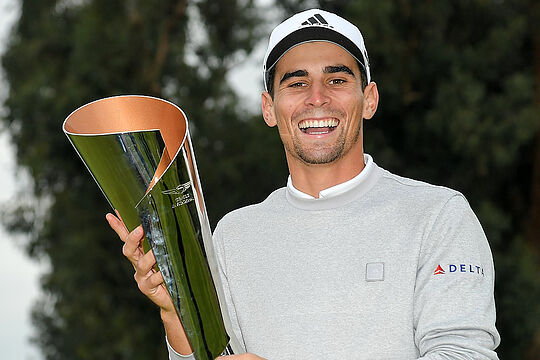 Young, making only his 12th PGA Tour start, was a runner-up for the second time this season having tied second at the Sanderson Farms Championship.

He earned US$1,068,000 on Sunday and with his two runner-up finishes from nine starts this season has moved to 17th in the FedEx Standings. The 24-year-old gained playing rights on the main tour having finished in the top-50 on the Korn Ferry Tour where he won twice in 2020-21 at the AdventHealth Championship and the Evans Scholars Invitational

Adam Scott finished the best of the Australians in a share of 4th position a final round of 66 moving him up six places on the final day.

Matt Jones finished in a share of 15th position along with Mac Leishman. Cameron Smith was 33rd with Cam Davis in a share of 48th to round out the Australians making the weekend.