Slow play has plagued the PGA Tour for many years, but 22-year-old Joaquin Niemann has made it clear with his record-breaking sprint around East Lake on Sunday that he won’t be part of the problem.

The Chilean rising star was left without a partner at the recent Tour Championship following the withdrawal of Brooks Koepka with a wrist injury. 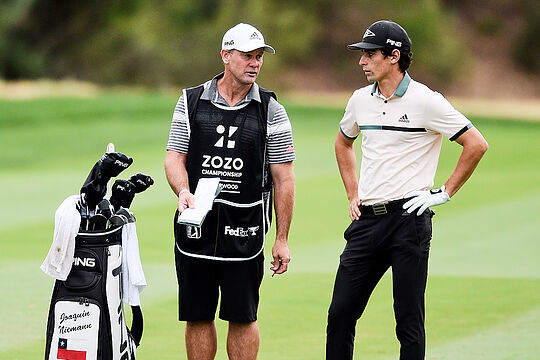 Teeing off alone at 11:40am, Niemann raced around the final 18 holes of the Tour Championship in one hour and 53 minutes.

He hadn’t set out to break any records but once he reached the halfway mark in just over an hour, he decided to chase the 1:58 record set by Kevin Na at the 2016 Tour Championship.

“I didn’t know how fast I could get 18 holes, but on the front nine, I decided to play quick but not like crazy quick, not like rushing and hurrying up. But then they told me I did like just over an hour, I was like, I’m just going to rush it and try to break the record. It was pretty good, the back nine.”

Of course Niemann is not the only person that needed to be in on the record attempt. His caddie Gary Matthews had to carry the bag as well as make the over 6km dash so he was well prepared with a lighter-than-usual load to carry.

“I would say it [the bag] was 25 pounds maybe. But definitely lighter than usual. I definitely knew that I needed to have it a bit lighter.”

Following the successful attempt, PGA Tour Chief of Tournaments and Competitions, Andy Pazder, decided to have a little fun with the duo in the scorer’s hut.

“Gary, come over here. We need to talk,” said Pazder to Niemann’s caddie.

At his point Niemann was understandably about to open his mouth and say something he might regret later.

“I look at him like, I was burning inside. I was going to say something and he’s like, “All right, forgive me. Before you say something, I was just kidding.”

Niemann completed his final round with a 2-over 72 for a 4-over total to finish last of the players that completed four rounds of the Tour Championship.

“I was in last place and wasn’t going to win. I was pretty far behind from the guys in front of me, so I was like, let’s make it fun and have fun.”