Canberra’s Nikki Campbell has come close to her first victory in her second Ladies European Tour season at the Deloitte Ladies Open in the Netherlands after a dramatic three-way play-off with Denmark’s Malene Jorgensen and eventual champion, Kylie Walker of Scotland.

The trio completed the 54-hole event tied at six-under-par before the 27-year-old from Glasgow sealed the win by holing a birdie putt from 20 feet on the second extra hole for her maiden LET title. 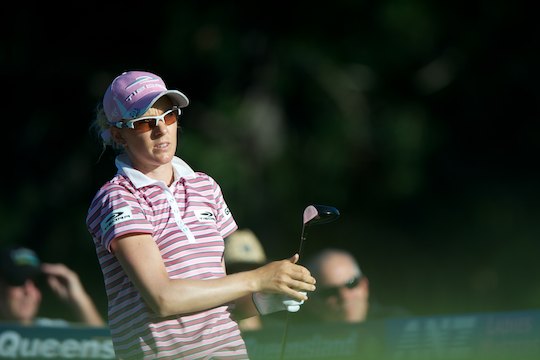 “Amazing; absolutely brilliant. I’m delighted,” said Walker. “I’ve been in play-offs to get in the British Open and US Open but not to win on the LET.”

On the second play-off hole, after the other players had missed birdie chances, Walker perfectly judged her birdie putt. “With the crowd erupting it almost overwhelmed me, with everyone screaming,” said Walker, whose previous best finish in was a tie for fourth at the 2011 Prague Masters.

“I was just really trying to win and I kept giving myself chances and not quite making the putts, although I did putt quite well. A lot of them looked good and didn’t go in, so I’m delighted to win in the end.”

Ironically, Walker had a chance to win in regulation play after reaching the same 18th green in two shots but three-putted.

Having recently secured a spot in next month’s U.S. Women’s Open, Campbell set herself up for a chance at victory with five birdies in her first eight holes, overtaking Walker with her birdie on the sixth and extending the lead with another at the eighth.

However the 33-year-old Australian three-putted on 15 to drop back into a share of the lead.

Campbell will miss the next LET event on the schedule, the Ladies Slovak Open from June 19th – 22nd, due to its clash with the U.S. Open at Pinehurst No. 2.