Australians’ Cameron Smith and Scott Barr have tied for 5th in the Asian Tour’s Selangor Masters in Malaysia on Sunday.

Smith held a one-stroke lead overnight but struggled to a final round 73 with Thailand’s Chapchai Nirat claiming the title after holing a four-foot par putt in extra holes to defeat Filipino veteran Antonio Lascuna. 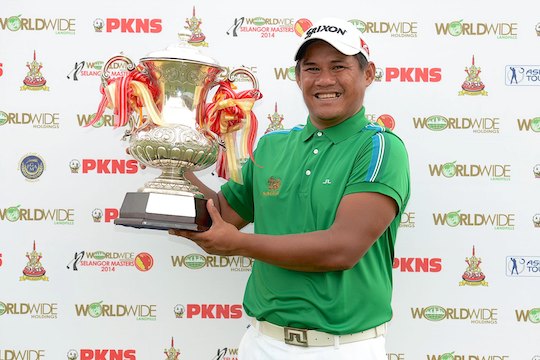 Lascuna charged into contention with a brilliant final round 63 to tie Chapchai, who closed with a 68 which included two finishing bogeys, on 10-under-par 274.

India’s Anirban Lahiri settled for third place, two behind the play-off duo, following a final round 68 while Order of Merit leader David Lipsky of the United States (71), Smith and Barr were amongst those who shared fourth place on 278.

“I didn’t think this day would happen,” said a delighted Chapchai, who was drenched with water by the Thai players who had gathered around the 18th green.

“I didn’t think I’d have a chance to win (after five years). Golf is a game where you need to stay patient.”

“I always talked to my caddie that if I could keep my form, I felt I could get one win again,” added the Thai, who earned US$72,670 to jump into sixth place on the Order of Merit.

Jake Higginbottom (-5), Kalem Richardson (-3) and Kieran Pratt (-2) also enjoyed solid weeks in Malaysia as the Asian Tour now shifts its attention to Japan for the Asia-Pacific Diamond Cup this week.