Daniel Nisbet has won the 2019 Queensland PGA Championship with a six shot victory over Deyen Lawson and Harrison Endycott.

The victory with rounds of 66, 63, 63 and 64 for a tournament total 24-under is Nisbet’s first Australasian Tour title in his home state of Queensland and his third win on the tour in the past 12 months having previously claimed the Northern Territory PGA Championship and New Zealand Open last year.

“It’s good to finally get one in my home state,” said Nisbet.

“I’ve been trying for a while so it is great. Finally my family got to see me win an event. It’s been a long time for them as my wins have been out of state or overseas so it’s good to have a win with all of them here.” 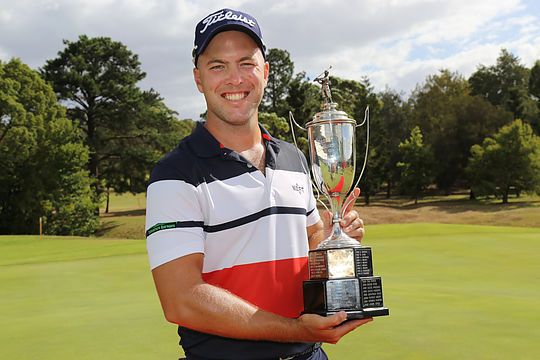 Nisbet heads to Queenstown this week to defend his New Zealand Open title in the tournament’s 100th staging. With his game obviously in fine form Nisbet will take some stopping.

“It’s a big confidence boost,” said Nisbet who pocketed $22,500 for the victory and moves to 10th on the Order of Merit.

“I head to the New Zealand Open tomorrow and I’m defending there so I’ve got a big 10 days coming up. I’m hitting the ball well and I’m putting well so for me those are the two key aspects of my game.If they continue to roll in and if I find the fairway then it’s happy days.”

A string of players finished at 15-under with Andrew Evans, Cameron John, Jarryd Felton and Lincoln Tighe sharing 4th position.

This was an impressive win for Nisbet, who held the overnight third round lead and never looked back. Even a double bogey at the 12th did little to derail Nisbet’s victory hopes as he went on to fire birdies on holes 13, 14 and 17 to secure a dominant win.

Endycott certainly attempted to apply pressure with a run of four birdies on holes 10 to 13 and an additional birdie on 17 was enough for a share of a runners-up finish with European Tour rookie Lawson, who struggled well with a closing 68.

Nisbet turned professional in 2012 following an impressive amateur career, which included wins at The Lake Macquarie Amateur and Keperra Bowl and a narrow miss at the 2012 Australian Amateur. On the Asian and China Tours, he claimed wins at the 2015 Morobe Open and in 2016 he won the Clearwater Bay Open in Hong Kong.