A spectacular eagle at the first playoff hole was the icing on the cake of a spectacular weekend for Queensland’s Daniel Nisbet, who took home the inaugural Clearwater Bay Open in Hong Kong on Sunday.

Nisbet rolled in a 10-foot eagle putt on the first playoff hole to defeat 54-hole leader Alex Kang to win the inaugural tournament, which is part of PGA TOUR China. 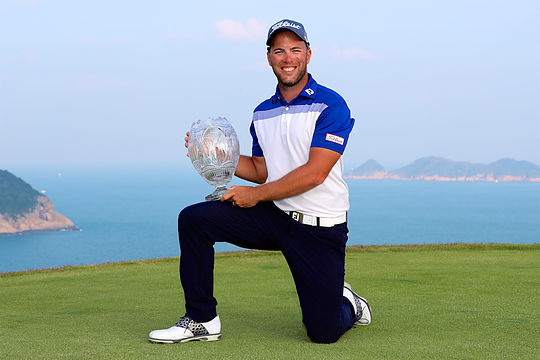 “That was probably the fastest my heart has ever been beating on a golf course,” Nisbet said. “I’m just happy I put together a good score. It was good to put four rounds together back to back.”

The 26-year old had played flawlessly over the weekend to shoot 65-64 (11-under) to tie with Kang at 15-under, after he had recovered from being five strokes behind Kang with the final round to play.

Playing the par-five 18th in the playoff, Kang’s second shot finished in rough to the left of the green before Nisbet took control, sticking his approach shot to 10-feet to set up an eagle chance.

Kang played a good chip shot to six feet but never had the opportunity to putt as a delighted Nisbet rolled in his eagle putt before him.

“This is the most enjoyable week I’ve had on a golf course,” Nisbet said, “This is the most breathtaking course I’ve ever played. The greens are almost exactly like what I grew up on. It’s hard to play bad golf around here.”

Fellow Australian David Lutterus enjoyed a good week with a tied 5th finish at 12-under, while David Mackenzie and Scott Barr logged top-ten finishes, sharing 9th place at 9-under.

The victory marked an enormous turnaround in fortunes from Nisbet’s last start, at the Queensland Open last month, where he was forced to withdraw after one round.

He had also missed the cut in the previous two PGA Tour of Australasia events but now travels home buoyed with confidence ahead of the NSW Open Championship at Sydney’s Stonecutters Ridge course, starting on Thursday.