Nisbet fights back at Aussie Amateur

Daniel Nisbet is a fighter and a good one at that.

Irrespective of the war of words between Nisbet and the golfing administration, Nisbet has shown that he is happy to let his clubs do the talking at this week’s Australian Amateur.

After fighting from four down in this morning’s quarter-final against Christopher-John Harrop, Nisbet eventually took the match on the 19th.

The win would set the momentum as Nisbet came out in the afternoon’s semi-final all guns blazing against the young and talented Jordan Zunic.

Zunic had earlier disposed of the big hitting Geoff Drakeford, 3&1, and was looking tough to beat.

When Nisbet smoked a majestic 3-wood 230 metres to pin high on the second hole at Woodlands, a 480 metre par 5, Zunic would be left in Nisbet’s wake for the remainder of the match.

It was arguably the best shot of the championship and Nisbet was on a roll moving to 2-up through two holes.

Nisbet never looked back and shut the gate on Zunic by the 13th hole with precision iron play and solid putting.

The 5&4 finish indicative of Nisbet’s current form as he moves in to the box-seat to claim his first Australian Amateur title following his runner-up finish at last week’s Master of the Amateurs at Royal Melbourne. 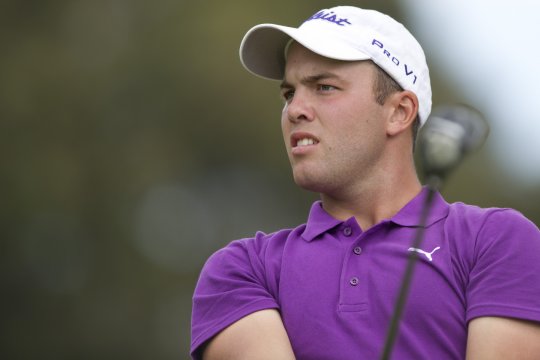 Daniel Nisbet follows his drive on the 9th during his semi final encounter against Jordan Zunic at the Australian Amateur (Photo: Anthony Powter)

Nisbet, the 27th qualifier, has disposed of Germany’s Benedict Staben, 4&3, James McMilan, 4&2. The wins were often come-from-behind in gritty displays of determination.

Nisbet’s efforts and self-belief have kept him focussed, not just at this championship, but during a eighteen month period of exile from elite amateur golf.

The absence enabled the Queenslander to reflect on his past and move forward in a positive manner knowing that he had the game and talent to return to top-amateur competition.

Nisbet’s opponent in the final will be Germany’s Marcel Schneider.

Schneider is Germany’s number one ranked amateur and ranked 61st in the world. A runner-up at the German Amateur, Schneider also collected a top-5 finish last season at the Lytham Trophy in the UK.

Schneider accounted for Ruben Sondjaja in a nail-biter of a semi-final, winning on the 21st hole.

The Nisbet/Schneider final promises to be a match of contrast of styles.

Nisbet, the player with plenty to prove and eager to move on, against the methodical and precise German.

Nisbet certainly has put in the hard yards, done his time and is ready to make a statement.

The only thing in his way is the talented Schneider, who has claimed many prized Australian scalps this week, including the defending champion Matt Stieger, on his way to his championship final berth.