Queensland’s Daniel Nisbet produced a 4-under par 68 after opening with a 69 to close within one shot of leader Andrew Sullivan after day two of the Scottish Stroke Play Championship being played at Blairgowrie Golf Club.

Nisbet, 20, a former Australian Junior Champion, picked up shots at the opening two holes to go onto finish his second round in style with a hat-trick of birdies on 15, 16 and 17 to move to 7-under par for the championship. 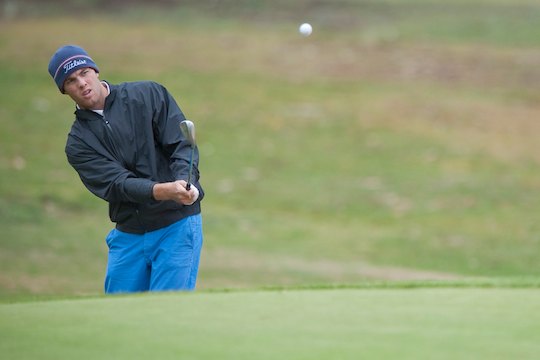 After a 18 month absence from competitive amateur golf, Nisbet has pressed the world’s best in Scotland irrespective of having no match fitness or tournament results to his credit, which sees his current world amateur ranking at 430th after reaching the top-40 in 2009.

Despite his present world ranking and the extended period away from the game, Nisbet remains confident and is glad to be back playing again.

“It’s been very windy but it’s the same for everyone so you’ve just got to go out there and enjoy it,” said Nisbet after the second round.

“I certainly can’t complain being over here golfing in Scotland as I could be back working in a bar in Australia. I’ve worked hard on my game with Peter Knight back in Australia. I’ve been waiting for this opportunity for 18 months and I’m excited to be back.”

International exposure with competing in main amateur events is something Nisbet is use to despite not playing for a while.

Before taking a break from the game back in 2009 Nisbet was Australia’s No. 1 amateur and was forging his name on the international amateur stage with a win at the 2009 Hong Kong Open Amateur, a second place finish at the 2009 Sahalee Players Championship in the US and a fourth placing at the St Andrews Links Trophy in the UK.

“These opening rounds here in Scotland was what I was looking for,” says Nisbet regarding his return to the game and scheduled tour of the UK and US.

“I am going to put a lot of effort into these three months and try and make them worthwhile. That’s the plan, to compete and see what results follow.”

Sullivan held onto his overnight lead with a solid one-under par 71 to adding to the Englishman’s impressive opening 65.

Jonathan Watt is in third position at 6-under, a stroke ahead of Steven Brown, Glenn Campbell and Oliver Farr.

Matt Stieger fired rounds of 71-72 to be at 1-under and seven from the leader.

This is Stieger’s first tournament for the 2011 season in the UK with the Australian Amateur champion heading into this campaign with three wins back in Australia and a world ranking of 13.

Last season Stieger collected his first international victory with the at the Pacific North West Amateur in the US.

The 36-hole cut came in at 3-over with Aussies Chris Akers, and Chris Wood missing the weekend.

New Zealander, Ben Campbell also had an opening Northern hemisphere tournament that he’d rather forget with rounds of 78-74 to miss the cut finishing in a tie for 124th.

Landyn Edwards and Daniel Pearce are the best of the New Zealanders in a tie for 32nd with rounds of 75-72 to be on the 3-over cut mark.