Daniel Nisbet is one round away from claiming his first major title in the US at The Players Amateur in South Carolina.

Nisbet shot a 2-under-par, 70, on Saturday to be at 11-under-par and a shot ahead of Alabama’s Bobby Wyatt.

Entering the third round with a three-shot lead, Nisbet played the front nine at even par and birdied 10 and 13. He parred the final six holes to follow his Friday round of 66 after opening with a 69.

“I grew up on this kind of course. This is the only kind of grass that grows there, and it’s just as hot. It’s just been a matter of getting back to the way I learned how to play.”

A seven shot buffer separates Nisbet and Wyatt from their nearest rival, American Michael Hebert, yet Nisbet knows how quickly that can change.

“There are some low scores out there,” says Nisbet about the Berkeley Hall’s South course.

“I’ll just stick to my game plan and focus on hitting fairways and greens. Hopefully, that will get the job done for me.” 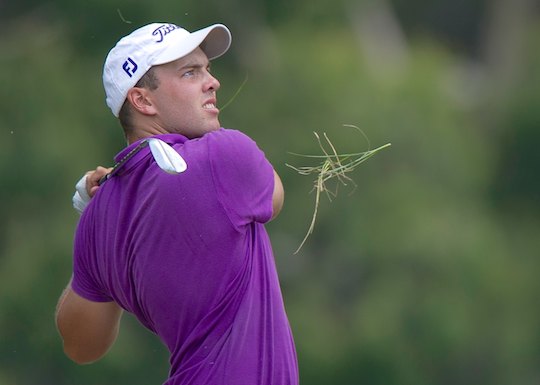 Daniel Nisbet is one round away from claiming his first major title in the US at The Players Amateur in South Carolina (Photo: Anthony Powter)

Nisbet arrived in the US on the back of a stellar Australian amateur season that included winning the Lake Macquarie Amateur championship and a runner-up finish at the Australian Amateur. In his UK leg of this tour he made the top-16 at the British Amateur to head to the US with plenty of confidence.

A prolific driver of the ball, Nisbet has the ability to rip apart any layout with his distance off the tee. Should his driver be working in tomorrow’s final round, Nisbet will be very hard to beat.

Tasmania’s Ryan McCarthy is the next best placed Australian in a tie for 4th position at 2-under-par and will need a low final round to claim the title.

Brett Drewitt is having another fine international tournament to be in a tie for 13th position at even par along with New Zealand’s Ben Campbell.

Despite the tournaments short life of only thirteen years, The Players Amateur is considered one of the most prized amateur majors in the US. Previous winners include British Open Champion, Ben Curtis, Bill Haas and Camilo Villegas, all now PGA Tour players.

Aron Price was the last Australian to claim the Players Amateur back in 2004 and it was a victory that he considers one of his finest amateur achievements.

Should Nisbet be holding the trophy tomorrow it will be a richly deserved win for one of our most talented players.

The Queenslander has worked hard, confronted numerous challenges and still continues to rise to the occasion when the glove is on.