Nisbet ran down West Australian Terry Pilkadaris’ five shot overnight lead with an eagle and four straight birdies on the back-9 to finish on 27-under 258 with rounds of 63, 66, 67, 62.

Nisbet’s four round total saw him break the tournament low score, 26-under, set by the late Kel Nagle in 1964.

“We have some great family ties with Kel Nagle. One of my neighbours who recently passed was a great friend with Kel and they kept him updated with my very junior golf.”

“It is a surreal thing to be put up against him and beat his record when there is so much extended family history with him,” said Nisbet. 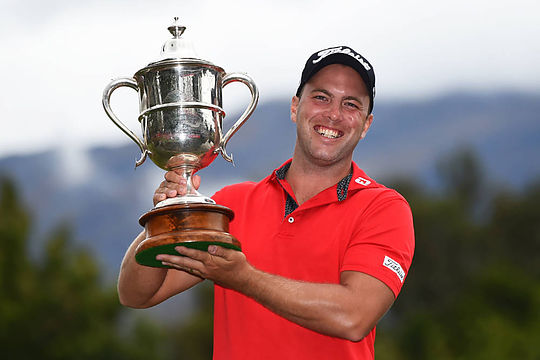 Nisbet had eaten into Pilkadaris’ buffer over the first-9 holes, but it looked as if he was starting to run out of time to haul him in.

An eagle on the 460m par-5 10th hole for the second time in as many rounds helped Nisbet to a share of the lead, before a blistering four birdie finish secured him the Brodie Breeze trophy and a rousing round of applause from the crowd surrounding Millbrook Resort’s island 18th green.

The win is a deserved reward for the hard work Nisbet has been putting in with his team.

“My coach, Richard Woodhouse, my wife Ashley, she does all my training for me, all my programmes – we just want to keep doing the same thing, it’s working at the moment. Hopefully I’ll get a few more starts out of this win and try and replicate it.”

Nisbet collects AU$191,522.61 for the biggest win of his career as well as three guaranteed starts on the Japan Tour, the rest of this season and the next on the Asian Tour and through until the end of 2020 on the ISPS HANDA PGA Tour of Australasia.

Having dined out on a birdie buffet for most of the week, he had to wait until the 11th hole before he recorded his first red number and then was helpless to stop Nisbet from running away from him over the final four holes, finishing in second place at 25-under the card.

“I didn’t make enough birdies, it’s as simple as that. I didn’t make any mistakes, just didn’t hole the 10 footers that I had been making,” said Pilkadaris.

“On a five shot lead, you know with good weather conditions that someone is going to go low. I thought I plotted my way around the course really well, gave myself the chances, I just didn’t hole the putts.”

American Jarin Todd finished third on 22-under the card while a shot further back and rounding out the top-5 was Kurt Kitayama (USA), David Bransdon (VIC) and Callan O’Reilly (NSW).

The ISPS HANDA PGA Tour of Australasia will now take a break until April when it travels to Royal Port Moresby Golf Club for the SP Brewery PNG Open Championship.