Nisbet to make a statement

When Queenslander Daniel Nisbet tees it up at next month’s British Amateur there will be more than just the usual jangle of nerves.

The event will mark his long-anticipated comeback onto the elite international amateur stage since receiving an 18-month ban for importing a steroid in late 2009. 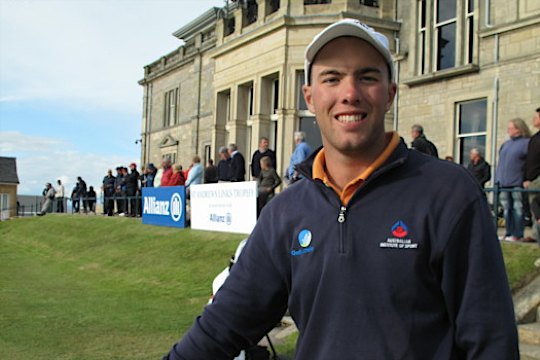 At the time, Nisbet was Australia’s No. 1 amateur and a highly-regarded internationally courtesy of his second place finish at the 2009 Sahalee Players Championship in the US and his fourth placing at the St Andrews Links Trophy in the UK.

Returning from Canada in August 2009, Nisbet entered Brisbane customs declaring his medicine that he had been taking for an illness.

In among his antibiotics and anti-inflammatories was a vitamin supplement he had purchased in Montreal.

Customs officials were unable to identify the product so they took it away to be tested and only three months later was it revealed that the supplement contained dehydroepiandrosterone (DHEA), a banned anabolic agent.

“It was a big shock especially leading up to Christmas,” the 20-year-old said.

“It was a pretty hard time for me and my family, I didn’t think I was doing anything wrong.

“What was in it wasn’t actually on the label.”

While initially Nisbet was angry at the world and even thought about quitting golf, he eventually decided on accepting the ban and vowing to come back stronger than ever.

“It took me a few months of working 9-5 and behind the bar at my golf club sometimes starting at three in the afternoon till 2am, for me to realise that golf is definitely the better option,” he said.

And now he is looking forward to testing his game against some of the world’s leading amateurs.

“I have been waiting for this for 18 months, there is a lot of excitement there,” he said.

“It is not going to be a cheap trip for me, being away for three months, so I am going to put a lot of effort into these three months and try and make them worthwhile.”

Nisbet is also philosophical about some of his fellow competitors who will always think he was a drug cheat that got caught.

“The people that don’t know me might think I had a lot to do with the situation and I was doing something wrong and you know if they think that, that is fine.”

Nisbet will be joined at the British Amateur by Golf Australia squad members, Matt Stieger and Ryan McCarthy.

After playing a handful of events in the UK including the Scottish Amateur, and the St Andrew’s Links Trophy, all three will then head across the Atlantic to America.

“I would like to be able to show that the ban hasn’t affected me too much in my competition. It has obviously affected me a lot but I think it has also made me a lot stronger and a lot better person,” Nisbet said.

“The only reason I expect myself to play well is the fact that I have just had unbelievable support at home and some people might not have the luxury of realising how much support they actually have at home as I have.”

Yes, the boy who was once banned for two months for burying his putter into the green at an amateur tournament has certainly grown up.

“I feel like my game is in a good spot at the moment,” he said.