Starting the final round with a two shot lead over Tim Hart and Sean Riordan, Nisbet struggled to get going on the opening nine holes. 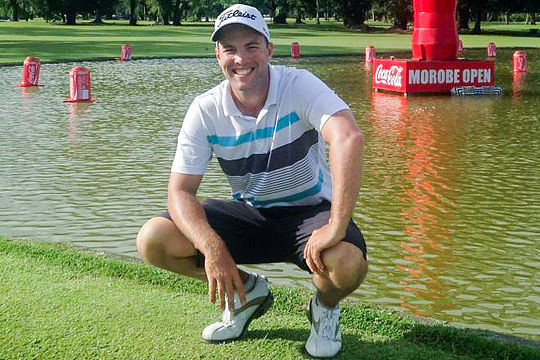 Nisbet came through the turn at 2-over the card and found himself four shots off the pace.

Fellow Queensland young gun Tim Hart had capitalised on his early opportunities to be 4-under the card and leading the field heading to the back nine.

Nisbet found a momentum shift on the 10th where he made birdie while Hart struggled with a bogey.

Playing steady golf through the middle of the back nine, Hart had a costly three putt, after driving the green, on the par-4 15th while a birdie for Nisbet saw Hart’s lead diminish to just one shot.

With the pressure now on Hart, he failed to get up and down on the 17th and headed to the final hole tied for the lead with Nisbet on 13-under the card.

When Hart’s approach to the par-5 18th hole finished just six feet from the flag, Nisbet responded by draining a 25 foot birdie putt to post a tournament total of 14-under 270.

“It was a left to right putt and knowing Tim was in there close, I just wanted to give it a chance to go in. When it went in though it was a bit surreal – one of the moments you only dream about,” said Nisbet.

With the pressure on, Hart holed his putt to join Nisbet at 14-under the card and force a playoff.

Playing holes 10, 11 and 18, the lowest aggregate score would decide the 2015 Morobe Open champion.

The playoff went down to the wire with both players making birdie on the 10th and 11th. The 18th once again becoming the pivotal hole in the tournament.

With a large crowd watching on, Hart missed the green with his third shot but managed to get up and down to save par.

“I have been thinking about winning my first four round professional tournament for so long, and it is everything I ever imagined it would be,” added Nisbet.

This victory has also taken him to the top of both the Choice Hotels PGA Pro Am Series Sunshine Swing Order of Merit and the PGA’s National Rankings.