New South Welshman James Nitties has won the South Pacific Open Championship in New Caledonia following a tight final round with Matthew Millar from the ACT.

Nitties started the day with a two-shot lead which evaporated quickly as he and Millar battled for supremacy throughout he final day. Over the critical final holes however, Millar suffered the misfortune of his ball lodging in a palm tree on the par four 15th, which lead to an unplayable lie and a double bogey. 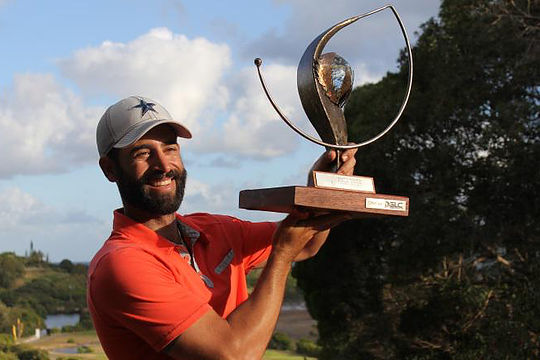 From that moment on, Nitties was able to cruise to a confidence-boosting six-shot victory with a total of 16-under 268.

“Very happy, it was an awesome week. I really played great golf all week; even today I probably played my best golf of all four days.” Nitties said.

“It was a great tussle between me and Matty, he is an awesome player, never makes any mistakes. He got a really bad break on the 15th hole; his ball got caught up a tree. You never want to see that but I was able to play well the last couple of holes and get the victory so I am very happy.”

Millar finished outright second on 10-under 274, extending his run of good performances on the PGA Tour of Australasia in 2015 where he has now logged six top-10 finishes, including a victory at the Holden NZ PGA Championship.

“It was certainly neck and neck the whole way until 15 where I guess it didn’t go my way.” Millar said.

“It was a close match, we both played well up until there (15) and then James continued to play well, he hit quality shots, I am happy that he won because he played really well.”

Christopher Wood finished outright third after firing an equal tournament low 7-under 64 to finish at 7-under, a shot ahead of Matthew Guyatt, Jason Norris, Michael Wright and 2012 South Pacific Open Champion Brad Shilton.

Nitties earned $22,500 for his win and takes great confidence into the $1.125 million Fiji International at Natadola Bay in two weeks, after admitting to playing “really badly in the U.S.” prior to this week.

“I didn’t really know what was going to happen before this event because I didn’t know where the ball was going and I was working on a lot of stuff.”

“So to actually come out and win a tournament, not actually knowing how well I am playing beforehand, is really awesome for my confidence.”

“It’s just a good feeling to start playing some good golf and turn it around before the start of the Aussie summer.”

“I am really looking forward to Fiji, I’m actually excited to have this new found positive confidence that I can take into some of the tournaments at the end of the year, especially Fiji.”