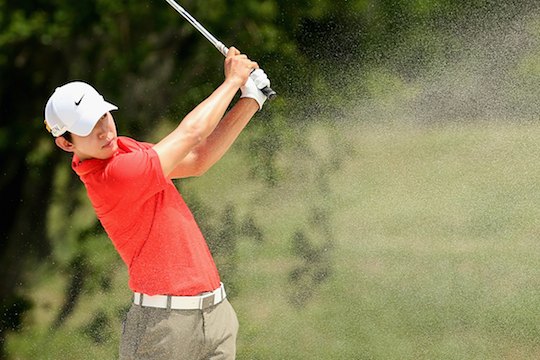 After turing professional in 2007, Noh finished 37th in FedEx Cup points in his rookie year in 2012, but until Sunday’s victory in New Orleans has struggled on the PGA Tour and played predominantly on the secondary Web.com Tour during 2013.

Noh picked up a win at the Web.com Tour’s Nationwide Children’s Hospital Championship and finished fourth on the money list to earn his PGA Tour card for 2014.

Now with his win in New Orleans, Noh earns a two-year exemption, a spot in the Players and PGA Championship, as well as a place at the 2015 Masters.

“There are a lot of young winners on the PGA Tour, like Rory, Jordan Spieth, Patrick Reed, all the younger guys winning two times, so I will try and keep working hard to catch up with those guys.”

However it was also a moving victory for the quietly-spoken South Korean and remembering the victims of a ferry that capsized and sank earlier this month and with a very good many still unaccounted.

“What happened back home is very tragic and we are all thinking of those who have been affected, and it is why we have been wearing special ribbons this week to show that we care,” said Noh.

“I have played on Jeju Island many times and I know the location where the ferry sank so that makes it the more emotional and sad.

“I just hope my victory in some small way brings a smile to the face of my people back home.”

Stuart Appleby was the best of the Australians finishing at 10-under-par for a share of 17th position, seven strokes from Noh.

Bronson La’Cassie finished in a tie for 21st position a stroke behind Appleby at 9-under-par, with Robert Allenby at 8-under-par to finish in a tie for 25th.