It’s not often in this day and age that world number one Lydia Ko shoots a five-under round of 67 and gets comprehensively beaten.

On Sunday at the ISPS Handa Women’s Australian Open, Ko did what she does best but unheralded Japanese Haru Nomura was just too good on this occasion at Adelaide’s Grange Golf Club (West). 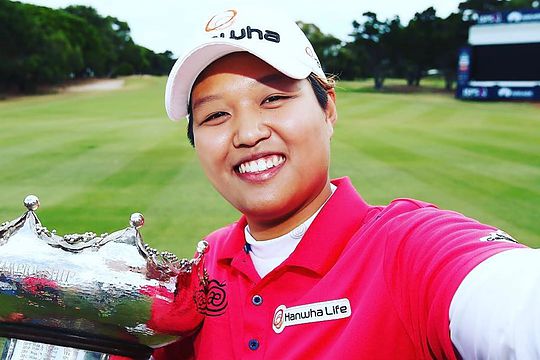 23-year old Nomura’s final round seven-under-par 65 was breathtaking as she careered away from Ko and the rest of the final round contenders, including five-time champion Karrie Webb, with a mere 26 putts for the round. Her 16-under par total included the ‘luxury’ of a final hole bogey which proved to be three shots to the better of Ko at 13-under.

“The putter, wow, unbelievable!” she laughed, counting the birdies over the back nine alone on her fingers. Through an interpreter, she said “There was no pressure.” on her as she focused on playing the course, and not consider the fact that the world number one was playing so well in the group ahead.

Looking back at the first two events on the LPGA this year, Nomura’s success was not totally unpredicted and she had held the lead at the halfway mark in both The Bahamas and Florida but did not go on with the job.

The lesson she learned from those experiences was to focus on her own play and her eight birdie, one bogey final round is a testament to her being a fast learner and in doing so, became the first Japanese winner of the championship since the inaugural event in 1974, when the Chako Higuchi won at Victoria Golf Club.

Ko gave herself a chance to win when she holed a long birdie putt at the 17th but that chance was effectively snuffed out when Nomura immediately matched her playing in the group behind. Ko showed her great sportsmanship to join a group of players to shower Nomura with water on the final green after the championship was sealed.

“Obviously, it’s not the best finish, you know, finishing with a bogey, but other than that, I played really well. But Haru played even better.”

Webb struck the ball very well all week in search of her 6th title and held the lead briefly over the opening nine holes, after three birdies in her opening six holes. However, the putts failed to drop over the closing stages for the Hall of Famer who finished at 9-under in outright third, although she was far from displeased with her efforts.

“What I can take from this week is it’s the best I’ve swung it for a long time and I know that the putts are going to drop, so I just have to be patient,” Webb said.

Of the other Australians, Su Oh came home with a 68 to finish tied 14th and Hannah Green of Perth carded a closing 69 to finish 20th, earning low amateur honours.

After a highly successful and well attended week in Adelaide, the LPGA moves on to Thailand this week while the ALPG and Ladies European Tour head to the Gold Coast for the RACV Ladies Masters at the fully renovated Royal Pines Resort.