Lee carded a final round 66 to post the lowest score of the day and move up the leaderboard to finish at 10-under-par. Earlier in the season Lee took out her maiden major at The Evian Championship and last year at the British Women’s Open finished in third position. Sunday’s result was Lee’s fourth top-5 finish in a major to date.

“You know, I got off to a really fast start, two birdies in the first three holes,” said Lee, 25.

“So I just tried to take as much advantage as I could with the short irons in and short putts. So yeah, I think I finished really strong, and on the par 3s, so pretty solid day.”

It was Nordqvist’s third major title after firing a closing round of 69 to finish at 12-under for a one shot victory over Lizette Salas, Georgia Hall and Madelene Sagstrom, who were tied for second place on 11 under.

“There was times I doubted if I ever would win again,” remarked Nordqvist, 34, who won the 2017 Evian Championship.

“And you know, for it being quite a few years in between victory, I think sitting here now, winning the British Open is a dream. It was definitely worth the wait, and definitely worth a lot of those struggles and being able to push through. But it’s been a lot of hard work to get here, too.”

Nordqvist picked a good week to return to the winner’s circle with the first prize cheque of US$870,000 part of the new largest prize fund ($5.8m) in women’s major championship golf. Nordqvist also won the Women’s PGA Championship in 2009. 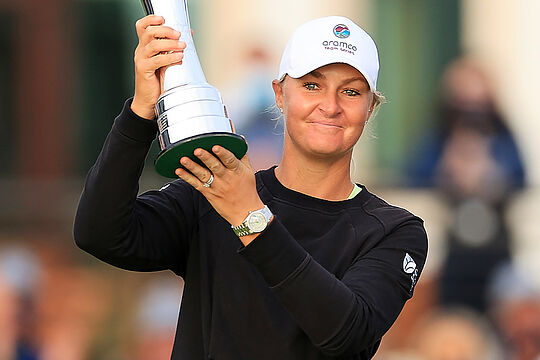 Ladies European Tour star Stephanie Kyriacou was the next best Australian finishing in a share of 13th position at 6-under, with Su Oh at 1-under and in a share of 34th position. Hannah Green finished at 2-over to share 48th position and the last of the Aussies to make the weekend.

World number one and Olympic champion Nelly Korda carded a 72 to finish in a tie for 13th at 6-under.