Anna Nordqvist made a five-foot bogey putt at the first extra hole in a sudden death play-off against Brittany Altomare as heavy rain and hail stones hammered down to claim her second Major at the Evian Championship in France.

With matching final rounds of 66, Nordqvist and Altomare came from five strokes behind the overnight leader Moriya Jutanugarn to tie for the lead on 9-under, but it was Nordqvist who triumphed on the par-four 18th. Altomare made a double-bogey, only moments after greens staff had been using squeegees to clear water from the flooded green. 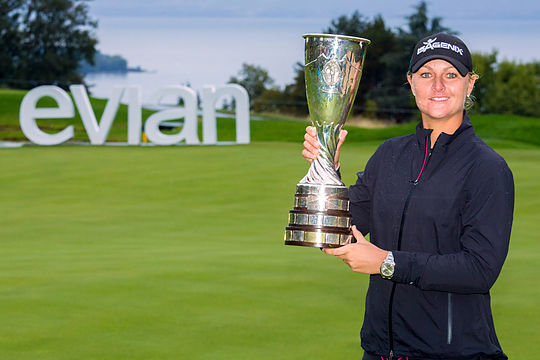 Nordqvist said afterwards that the conditions were the toughest she had ever seen.

“I did grow up in Sweden, but I’ve been in the US for 10 years now, so I really struggle with the cold, and I couldn’t feel my hands on the last few shots in the playoff.”

Earlier in the day, she had been 2-over for the round after five holes, but she played her next 11 holes in 8-under, before making a bogey on the difficult 18th.

“I hit a great 6-iron in on six. I made birdie there and then I spun a wedge for eagle on my seventh hole. But then on 14, I hit a great hybrid and birdied there, and then great 3-wood in on 15 to birdie. 18 was playing really tough today, so making a bogey there in regulation felt great.”

Only two-and-a-half months ago, Nordqvist was put on bed-rest for a fortnight, having been diagnosed with mononucleosis during the US Women’s Open. She returned to tie for seventh at the Ricoh Women’s British Open and was the leading points scorer for the European team at The Solheim Cup, earning 3½ points from four matches played.

“These last couple of weeks it’s been hard, it’s been frustrating and disappointing. I was very excited to tee it up in The Solheim Cup and I was absolutely exhausted after. I came back last week, hit it flawless and missed the cut, so it has just been very testing, but I couldn’t be more proud,” she said, having been greeted by European captain Annika Sörenstam and Gary Player who watched her win the play-off at the Evian Resort Golf Club.

The 30-year-old from Eskilstuna became the first European woman to win a Major since Suzann Pettersen, who won the Evian Championship in its inaugural year in 2013. It was Nordqvist’s second victory of the season, following the Bank of Hope Founders Cup.

This was her eighth career victory in total and her second Major following the 2009 McDonald’s LPGA Championship. With first prize winnings of $547,500, or €460,343, she has now earned more than $8 million in her 10-year career.

With her second-place finish, Altomare almost doubled her career earnings, with $339,625, or €285,560. Her only previous career top-10 finish was a tie for third in the Cambia Portland Classic Presented by JTBC two weeks ago.

Earlier in the day, the sun shone on the 18th green as former world number one Ai Miyazato played her last hole on Tour before her retirement.

There were smiles and tears as she was greeted by Gary Player, who presented her with a bunch of roses and friends Paula Creamer and Yani Tseng.

Miyazato said afterwards: “I didn’t have any expectations for today actually. I just wanted to keep my routine and do the same thing and be myself because I knew I would be so happy after I finished today and would see all my friends behind the 18th green. Having these flowers that Mr Player gave to me means a lot and I’ve made so many friends over my 12 years on Tour.”

With the final Major of the year in the books, So Yeon Ryu won the Rolex Annika Major Award for the best overall performance across the five Majors in 2017.