Anna Nordqvist closed with a 2-under 69 in windy conditions to finish at eight-under at the ShopRite LPGA Classic, a stroke clear of Christel Boeljon of the Netherlands, to win her fifth LPGA title.

“It’s the first time I’ve won on the LPGA Tour and one of my family members were there with me, so it’s definitely special,” Nordqvist said. “It’s Mother’s Day in Sweden, so I couldn’t have given her a better present than to spend the day with her.” 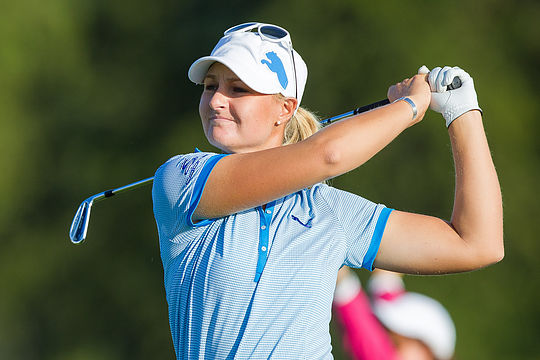 A stroke behind leader Morgan Pressel entering the round, Nordqvist made her move on the closing three holes – a stretch she played in five-under the first two days.

She sank a 12-foot birdie putt at the par-four 16th to break a tie with Boeljon and hit her tee shot on the short par-three 17th to 8 feet and holed the putt to move two ahead.

Boeljon, the 2012 RACV Ladies Masters champion, inexplicably missing an 18-inch birdie putt at the 18th which allowed Nordqvist the luxury of a bogey at the last and still claim victory.

Pressel was in search of her first victory since 2008, however a bogey-double bogey stretch on the 6th and 7th dropped her out of the lead and into a position from which she could not recover.

“I just didn’t make anything today,” Pressel said. “I didn’t hit it quite as well. I certainly made a mess of 6 and 7 and got behind the eight-ball early, and these greens are just a little bit too bumpy to make a ton of putts out here, even with good strokes.”

Australian Karrie Webb won this tournament two years ago and rattled home in five-under 66 on Sunday to share 5th place with four other players, four shots behind Nordqvist.

Sarah Kemp finished tied for 16th at two-under while Minjee Lee tied for 33rd at even par.

The LPGA now heads to Canada for the Manulife LPGA Classic in Cambridge, Ontario which will be an important tune up ahead of the second Major of the year – the Women’s PGA Championship at the Westchester Country Club in New York – the following week.