Noren captures fourth title of the year at Nedbank

It took Alex Noren 199 European Tour events to capture the first four victories of his career but now just a run of 11 events to savour success in the next four after his stunning success in the Nedbank Challenge in South Africa.

The new World No. 9 stormed home on the back of a stunning nine-under par 63 to win by a stunning six shots for a 14-under par tally on the Gary Player course at Sun City near Pretoria. 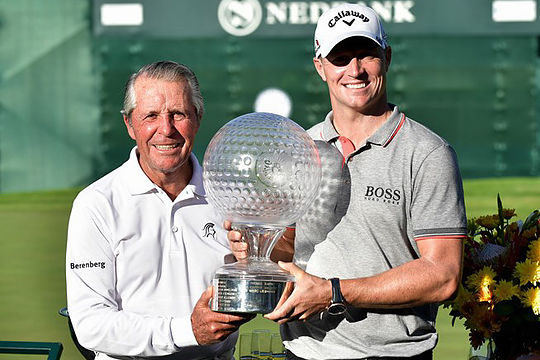 Since capturing the Aberdeen Asset Management Scottish Open in July Noren has added the Omega European Masters, the British Masters and now the Nedbank Challenge to his victory CV.

The Swede follows Dane Thorbjorn Olesen as the second straight Scandinavian winner and with Open Champion Henrik Stenson, who continues to lead the Race to Dubai after finishing eighth in South Africa, looking to make it a Nordic whitewash of the Final Series.

And Noren put his victory, and in his first start in the event, down to an overnight session working on his putting in his Sun City bedroom.

“I’ve tried to get in this tournament for so many years, and when I got in here, I end up winning so it feels unbelievable,” said Noren.

“Waking up today, I thought if I can get a decent round in it, because it didn’t feel very good shooting a 75 on Saturday.”

“But I worked on my putting in my room last night, trying to get the right feelings for today and it clicked.”

Noren’s victory has seen him leap frog Rory McIlroy into third place on the Race to Dubai while Noren will move to the new World No. 9, a far cry from his 99th Ranking in teeing-up at Castle Stuart last July.

And Noren’s only the fourth Swede ever to be ranked inside the top-10.

Korean Jeunghun Wang, who had led by three heading to the final day, struggled in posting a 75 but managed to hang on for second place at eight under par.

And Masters Champion Danny Willett seems to have regained form shooting a second straight sub-70 to share 11th at 11-under and just three adrift of Stenson (70) and in eight place.

Scott Hend again lead the small Aussie field at 7-over and in a tie for 44th place following a final round 80 with Marcus Fraser a further two strokes back at 9-over. Australian PGA champion Nathan Holman withdrew after two rounds.

What’s In The Bag – Alex Noren