The 32-year-old Noren birdied the first and 18th holes in a one under par 71 for a 12-under par victory tally in bright but cold and windy conditions on the Lakes Course at the PGA National Sweden.

The shaven-haired Stockholm-born Noren, who is a fan of the great Ben Hogan, ended a four-year victory drought after having won a first Nordea Masters in 2011.

However Noren is currently competing on a European Tour medical exemption missing all but two events of the 2014 as he struggled tendonitis in both wrists. 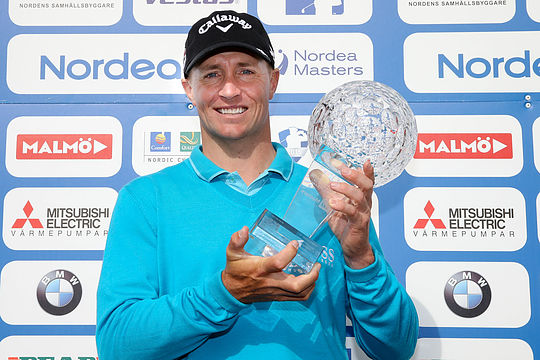 “I wasn’t too confident coming into this week because I’ve had a tough time in the wind lately and here you really have to hit the right shots to get around. I got better as the week went on.”

“The key to my round today was that I hit my Callaway Big Bertha driver really well and that helped in the windy conditions we had today.”

“I kept my poise and tried to hit the shots we needed, and it worked. My caddie really helped calm me down and make me stick to my routine.”

“You have to enjoy the good days in this game because you have plenty of bad ones.”

Malmö native Jens Dantorp, Alexander Levy, Sebastian Soderberg and Maximilian Kieffer all finished two shots further back on six under, while World Number Four Henrik Stenson signed off with a 74 for a share of 13th place.

Kieffer, who began the day two shots off the lead, matched Noren’s birdie on the first but carded back-to-back double bogeys on the fourth and fifth on his way to a three over par 75.

Scott Hend was the only Australian to make it through to the weekend. The Queenslander finished in a tie for 33rd following rounds of 74, 69, 71 and 73.