Sweden’s Alex Noren was handed an early birthday present and now heads to this week’s Open Championship in the best possible form after capturing the Scottish Open at Inverness.

Noren, who turns 34 on Tuesday, celebrated his fifth European Tour victory courtesy of a closing round 70 to win by a shot with a 14-under par tally in rainy conditions on the Castle Stuart course. 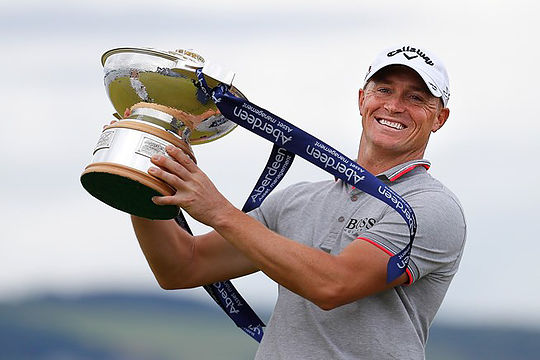 Noren went into the last day leading by two shots and despite New Zealand’s Danny Lee drawing level near mid-round, the Swede was never headed and moved back to two shots clear of his rivals with birdies at the 12th and 15th holes.

The 33-year-old, who had been side-lined for all of 2014 with tendinitis in both wrists, was challenged by England’s Tyrrell Hatton who birdied the last in a round of 69 for a 13-under par tally, but Noren held on holing a short par at the last to claim the €645,000 first prize cheque – the highest of his 11-year pro career.

“I was just so nervous the whole day today but when the game doesn’t feel as good as it looks, you just want it be over somehow and come up with the win and that’s what happened,” he said.

“But then it feels really good to win and to be headed now to The Open though I have been having trouble with my driver a bit and the guys at Callaway changed the driver for me to one where the ball doesn’t go too much right.”

“So the driver has been great and that is kind of what has been lacking in my game the weeks before this week, and by hitting more fairways…it helps in playing golf on links courses like this.”

“And this is by far the biggest win, the amount of players that are here, and on a course like this in Scotland, it’s only what I dreamt of growing up.”

Manassero’s effort is his best finish on the European Tour since a fourth in the same event two years ago, and also earned the 23-year old a place in this week’s Open Championship.

In 2010, the then 17-year old Verona-born Manassero became the youngest winner in the history of the Tour after capturing the Castellon Masters. Two years later, he climbed to a career high of No. 25 in the world but has since slumped to No. 596th on the World Rankings.

His share of third, along with a place in this week’s Open, could see a turnaround for the better in Manassero’s game.

Joining Manassero and Hatton in securing spots into Royal Troon was Colsaerts and Scotland’s Richie Ramsay (67) who shared sixth place on 11-under par.

The American duo of Patrick Reed and Phil Mickelson also head to Royal Troon in decent form with Reed birdieing two of his closing three holes in a score of 67 to share ninth place on nine under par.

Mickelson, wearing a golf glove on each hand to combat the wet weather and something he intends to adopt this week at Royal Troon, finished with a 66 to share 13th place at seven under par.

Andrew Dodt took out the top Aussie honours with a closing round of 5-under 67 to finish in equal 39th.

First round co-leader Scott Hend dropped into a tie for 45th on Sunday following a two-over 74. The nine-time Asian Tour winner will now turn his attention to the Open Championship where he missed the cut in his only two appearances in 2005 and 2015.