Alex Noren claimed the biggest of win of his career and in the process became the first Swedish-born winner thanks to a course record closing 62 for a two-shot victory at the BMW PGA Championship.

Not since the first championship in 1955 has the Swedish flag been flown from the top of the mast, well not until now. 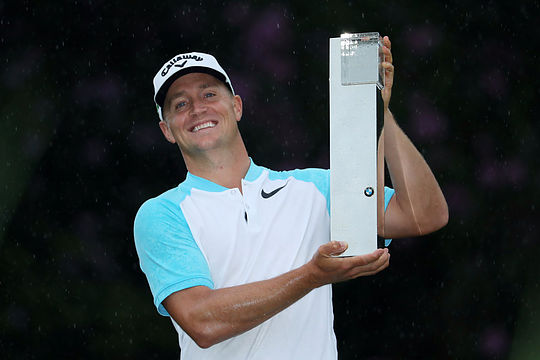 Noren, 34 stormed home finishing some two hours ahead of the overnight leaders and blitzing the revamped “Burma Road” layout with a new course record of a 10-under par 62 to win by two shots at 11-under.

Noren had come from a distant share of 21st place to secure a ninth Tour title, and the biggest win of his career, with a round that included eight birdies and a 72nd hole eagle “3” after landing a 4-iron second shot to some five feet.

“It feels amazing to win as I have been in the Player’s Lounge for about two hours and feeling really nervous waiting for the outcome”, said Noren.

“That round was probably my best round ever.”

“It’s a tough course mentally coming down the stretch. It’s not super narrow, but it’s just if you hit it a little bit wayward, it can cost you.”

“And I putted probably the best I’ve ever putted, and to hole that eagle on the last was a great boost as I have struggled on that hole before with plenty of bogeys and some double bogeys, so I was looking to get some revenge.”

“So, to also win the first Rolex Series event is pretty special”.

In-form Italian Francesco Molinari birdied his closing two holes to secure second with a round of 68 for a nine-under tally.

Three players – Belgium’s Nicolas Colsaerts, who like Noren also began his last well behind at one-under and shot a 65 ,along with Open Champion, Henrik Stenson with a 68 plus Japan’s Hideto Tanahara also shooting 68 – shared third spot on eight- under.

Australian hopes were dashed with third round leader, Andrew Dodt, firing a final round 73 to slip back into a share for 6th place and four shots off the pace.

Scott Hend was next best in 24th place and the only other Australian to make the cut.