The Grove, Watford, England: Sweden’s Alex Noren overcame a mid-round stumble to shoot a closing 69 for a two stroke British Masters triumph at The Grove course north of London.

Noren, who posted an 18-under par tally, captured his third Tour title in eight events and also becomes the first player since Rory McIlroy last year to win three events in a European Tour season. 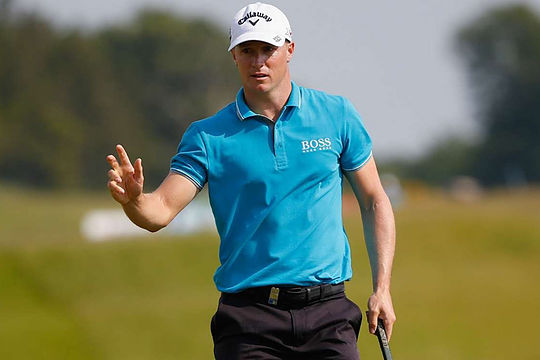 The 34-year-old Swede, who won the Scottish Open and European Masters earlier this year, now joins the respective World No. 1 and 2 Jason Day and Dustin Johnson who won three times on the 2015/16 PGA Tour season.

Victory earned Noren a €555,460 first prize cheque and lifts him to a World Ranking career high just inside the top-20 with fellow Swede Henrik Stenson currently World No. 5.

“I believe in myself, but the big thing is like you don’t have to play a perfect game,” said Noren.

“You just have to have a few parts of your game need to be strong to get a win.”

“My putting was probably the best thing this week. I holed a lot of putts. My chipping and wedge game was a lot better, so it helped me out. Maybe the driving wasn’t the best but I didn’t lose that much ground on it.”

Noren’s seventh Tour success since has seen him jump from 9th to 5th on the Race to Dubai money list.

“I try to stay humble as golf is a tough game so I take any win,” he added.

“But it’s an amazing feeling to have won three times this year as I thought this would not happen to me.”

Austrian Bernd Wiesberger, who had drawn level with Noren after 15 holes, signed for a 67 to finish runner-up at 16-under par.

And England’s Lee Westwood bounced back from his disappointing Ryder Cup showing to post a second straight 67 and grab third place on 15-under par.

“It was a solid performance as I had it the ball pretty well but one of those weeks where I feel like I didn’t make enough putts from 15 to 25 feet,” said Westwood.

“Of course, the Ryder Cup was disappointing for many reasons, for everybody, really. And then last week I struggled to sort of get back into it and get my tournament head on.

“This week, everything has been back together and played well. Everything was good. Nice performance. Probably going to finish top three, so pleased with that.”

Of the small Australian contingent lining up this week – Richard Green, Andrew Dodt, Brett Rumford and Nathan Holman all missed the cut.