Just when you thought it might have been all over for Greg Norman’s Saudi-backed Premier Golf League, the two-time major champ has bounced back with the announcement of a launch date for the US$250 million fledgling series.

The eight-event LIV Golf Invitational Series is set for a June 2022 start at the Centurion Golf Club in London, which will then wrap up in late October with a US$50 million Team Championship at a yet to be announced venue – presumably somewhere in Saudi Arabia. 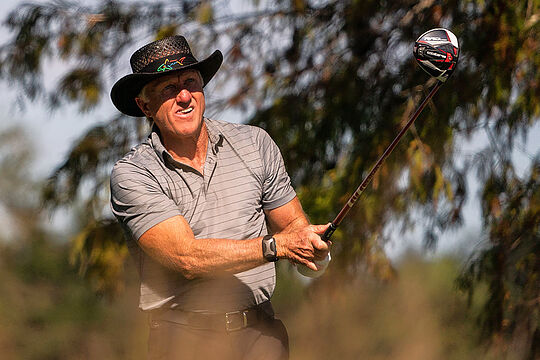 “I want golf to grow, players to have additional opportunities, and fans to have more fun. My mission is to help the game reach its full potential and we know the role of golf as an entertainment product is critical to overall participation in the sport,” said Norman.

“In many ways, we are a start-up. We have a long-term vision and aim to grow. I believe we have a very bright and exciting future.”

Four events are scheduled to take place in the US with another three to be staged internationally from Bangkok, Thailand through to Jeddah, Saudi Arabia.

Interestingly Norman’s old mate Donald Trump gets a look in with an event slated to take place at Trump National Golf Club Bedminster in late July. The course was previously home to the 2017 US Women’s Open but was stripped of the 2022 US PGA Championship following Trump’s involvement in the Capitol riots.

In the first year of the competition, a maximum of 48 players will play in 12 four-man teams. Each event will feature a total purse of US$25 million with $20 million to be shared between the individual players and another US$5 million split between the top three team results. The recent Players Championship won by Cameron Smith featured the largest ever purse offered on the PGA Tour with US$20 million.

Another US$30 million will be divided between the top three individual players at the end of the first seven events.

It’s hard to imagine any company currently associated with the PGA Tour or DP World Tour would go anywhere near the television rights, however, with streaming services such as Apple, Netflix and Amazon available, Norman has plenty of choices that can provide an instant worldwide audience.

The LIV Golf Invitational 2022 schedule have confirmed the following dates and locations for its inaugural schedule.

Each event will consist of three rounds with 54 holes and no cut, as well as shotgun starts to ensure a faster paced tournament and addressing a common complaint about golf coverage in the US.

The only question now is who will be filling the 48-man field? With many of the world’s top players seemingly turning their backs on the new league, it would seem only the second-tier player might be willing to throw away their PGA Tour careers in search of the promised riches.