The 2023 schedule is yet to be released, however, news out of the LIV Golf camp overnight confirmed that Australia will be one of the countries playing host to the rebel tour.

LIV Golf CEO Greg Norman was in Adelaide to announce the multi-year deal at The Grange and the same club where the 67-year-old won his first professional title in 1976. 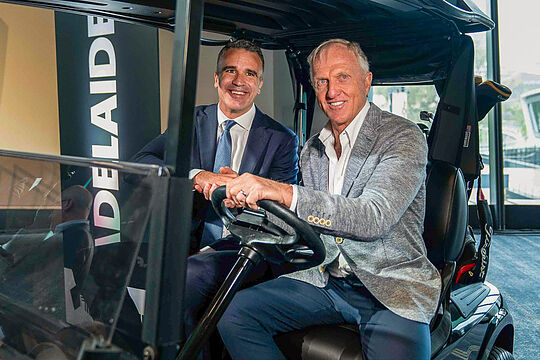 “From the beginning of my family’s journey to Australia on my father’s side via Port Lincoln, to my first professional win as a young 21-year old Queenslander at the 1976 West Lakes Classic, it is only fitting to be bringing @livgolfinv to South Australia’s @grangegolfclub in 2023,” said Norman via his Instagram account.

“There is massive potential for Australia to play a bigger role in golf, and we at #LIVGolf couldn’t be more excited to showcase Adelaide for our league’s debut year.”

LIV Golf Adelaide will be one of 14 no-cut events on the 2023 calendar for the breakaway league, which will begin in February and culminate with the Teams Finale at the end of September.

“As Premier, I am determined to lure more major events to South Australia, which means more visitors, more economic activity and more jobs. LIV Golf will bring some of the world’s best golf players to SA for an event the likes of which our country has never seen before.”

The South Australian tournament will tee off from April 21-23 and just a fortnight after the Masters, which still remains a mystery as to its stance on LIV Golf players.

It seems the PGA Tour’s decision to effectively turn its back on Australia (and New Zealand) over a decade ago may come back to haunt them along with all of the other neglected regions across Africa and Asia that are ripe for LIV Golf.