(Dublin, Ohio:) Former double Major winning Greg Norman says his Memorial Tournament Induction is the next best honour in his career after carrying the 2000 Olympic Games torch across the Sydney Harbour Bridge.

Norman became only the second Australian-born golfer since Peter Thomson in 1998 to be honoured with the award at Muirfield Village, where the Queenslander won twice (1990 and 1995) in his PGA Tour career. 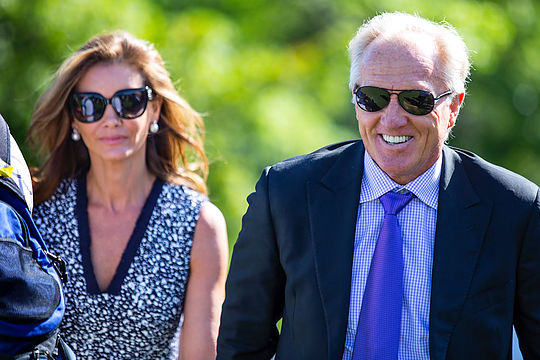 Greg Norman arrives at Muirfield for his Memorial Induction (Credit: The Memorial)

“I’d actually put it up in the top two,” said Norman.

“I think the number one for me was carrying the Olympic torch across the Sydney Harbour Bridge. That one you can never describe or explain, but just to be there with the 30-odd-thousand people, when there’s supposed to be 3,000. So I’d put this one in my top two, for sure. Because it’s a culmination of time, that’s what it is.”

Tournament host Jack Nicklaus introduced Norman to a large gathering on the main practice range at Muirfield Village with the official guests a who’s who in golf including the respective heads of the PGA Tour, the PGA of America, the USGA, the World Golf Hall of Fame along with Norman’s wife and his children.

Also present was Barbara Nicklaus and their own children.

“When I got on the plane to fly up here today, I was trying to put into words what it meant, how to express myself, the meaning and the strength of it”, said Norman.

“And there really isn’t a right way of expressing it because it’s a reflection of everybody recognises your performance on the golf course as well as off the golf course, how you conducted yourself in different situations.”

“But at the end of the day, it’s when you reflect back on all the other honourees that you realise that you’re sitting in a very elite bucket of very impressive individuals. So, to me, I still can’t find the right words to tell you the truth.”

“And I think it impressed Jack. And I think that’s the most important thing. If you can impress a guy as humble as he is, you’ve done your job.”

Nicklaus spoke fondly of his long relationship with Norman but began his introduction singling out probably the biggest embarrassment of Norman’s career and that was when Norman cold-topped his drive off the first tee of the Australian Club at the 1976 Australian Open with Nicklaus as his playing partner.

“And that is so true as I cold topped it,” said Norman laughing.

“I was lucky to put the ball on the tee because I was shaking that much. I actually think I dropped it and hoping it just stayed on the tee. And I hit it 40 yards, not even 40 yards. I had just won the week before.”

“So I was very, very much embarrassed, humiliated, but also stimulated in a lot of ways just by being there with Jack. I beat him the next day, by the way. I shot 72 and I think he shot 73. So it was rewarding.”

“But really the end of the 36 holes was probably the most memorable of all for me because he sat next to me in the locker room, changing his spiked shoes at that time, and he put his hand on my knee, he said, ‘You’ve got the game to do well in America.’ And that was that.”

“Again, that was Jack saying the right thing at the right time to give me the confidence. But you would have been impressed with the cold top. It went dead straight, too, by the way.”

Nicklaus also brought up in his speech to those gathered around on the practice range, and very much in a tongue-in-cheek way, how he denied Norman victory in the 1986 Masters, and it later led to Norman being asked if there was one mulligan he could have had in his career, what would be the shot.

Norman singled out his second shot into the final hole on the last day of that 1986 Masters.

“I wouldn’t pick maybe the main one, but it’s one that comes flooding into my mind but the first one would be the ’86 Masters, the 4-iron instead of the 5-iron,” he said.

“Jack beat me in that event. Didn’t he shoot 29 on the back nine or 30 on the back nine? Something like that. I knew then I made — all day long I had been playing great golf. Solid golf. Really aggressive golf.”

“And I made a decision — and Steve Williams said, Hey, you know, just go ahead and power your 5. It was 187 yards. I can tell you exactly what the yardage was.”

“And I wanted to just carve in a really nice soft 4-iron in there and knock it close. And I had been on a bit of a birdie run. And I made the wrong choice.”

“If I had to go out and made that shot again, I would have pulled out a 5-iron, and hit it right at the top of the flag stick like I had been doing all day and just hit a hard 5-iron.

“The result might have been different, I don’t know”.

The golfer long known as the Greg White Shark was also struggling to get around Muirfield today having injured his left leg in a tennis mishap some seven weeks ago, with Norman confirming it will be a further fortnight until he is free of the leg brace.