Greg Norman will make a sentimental return to the scene of his career-defining first Major Championship victory after confirming he will play in The Senior Open Championship at Turnberry from July 26-29. 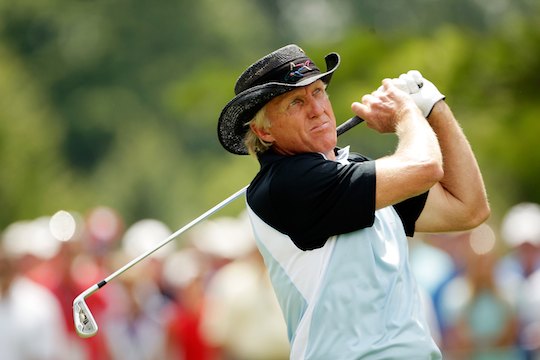 Norman went on to spend 331 weeks as the world number one and claim a second Claret Jug at Royal St George’s in 1993, but Turnberry will always hold a special place in his heart.

He is relishing the opportunity to return to the renowned Scottish links next month when he will join fellow Turnberry champion Tom Watson in the field for the 26th Senior Open Championship.

“I’m really looking forward to returning to Turnberry for this summer’s Senior Open,” said the 57-year-old.

“I’m sure once I arrive the memories will come flooding back. Turnberry will always be special to me as that is where I won my first Major Championship.”

Norman’s victory 26 years ago – one year before the first Senior Open was held at Turnberry in 1987 – is one of those iconic Turnberry moments and the ‘Great White Shark’ has vivid recollections of how he captured his first Claret Jug.

“It really was a special time,” he said. “I will never forget that victory and the events of that week.”

“I vividly remember sitting in the restaurant at the Turnberry Hotel on Saturday night when Jack Nicklaus came over and pulled up a chair.”

“Jack gave me a tip that night on grip pressure. He said ‘concentrate on the pressure of your grip, and that will orchestrate your tempo. Everything should fall in place.’”

“I took that tip to heart and the next day, I really did play well.”

Norman had to miss the last two Senior Open Championships due to a troublesome shoulder injury, but he is now back to full fitness and hoping to join Bob Charles, Gary Player and Tom Watson as the only players to have achieved a Senior Open and Open Championship double.

“It would certainly be great to win the double, but I have not played in many tournaments this year so we will have to see what happens.”