Take a chill pill guys. That’s appears to be the advice from former world number one, Greg Norman, when he was asked what the Americans needed to do to win back the Ryder Cup.

The Great White Shark has been in a similar hotseat as he was the losing International captain of two Presidents Cup teams as well as being a member of the only International team to beat the Americans, at Royal Melbourne in 1998. 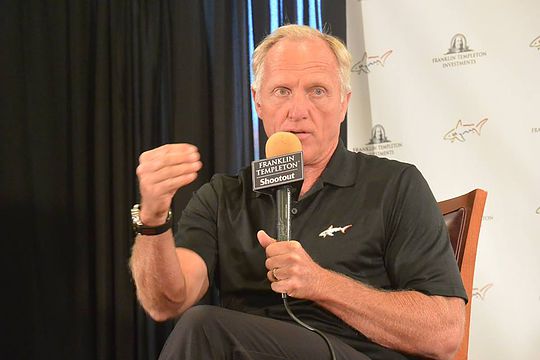 The two-time major winner admitted he was surprised the PGA of America had taken the dramatic step of setting up a task force to find the next Ryder Cup captain to replace Tom Watson.

“They [the US] just need to go have fun and play. That’s what those guys on the European Team have been doing.”

“At the end of the day if you just take a page out of the European Tour’s book and how they approach it.”

Norman said the European captains had handed down the secret to each of their successors in recent years.

“The captains want to know what went right and what went wrong from the previous captain,” he said.

“There are no egos, there’s no jealousy or anything. The European Team really gelled all the way through.”

“And they start talking about the [next] Ryder Cup as a team from the day after the one that was completed at Gleneagles.”

“So they instill this spirit for two years and that spirit just comes out for that four or five days…and you can see the difference.”

“You watch it on TV, and I watched every stroke of the Ryder Cup.”

“You could see also the difference in expressions on the players’ faces and that’s what missing on the US Team.”

Norman said the Americans simply had to focus on team spirit and getting everybody working together at an earlier stage.

“That’s when I think the American team will really start to gel,” he said.