If the PGA Tour wasn’t concerned about Greg Norman’s LIV Golf Investments and its $200 million Asian Tour partnership, this week’s “The International Series” announcement and an extra $100 million cash might turn a head or two back in Ponte Vedra Beach, Florida.

66-year-old Norman, who was named CEO of LIV Golf Investments last year, was speaking ahead of the $5 million Saudi International, which marks the first tournament of the new partnership. 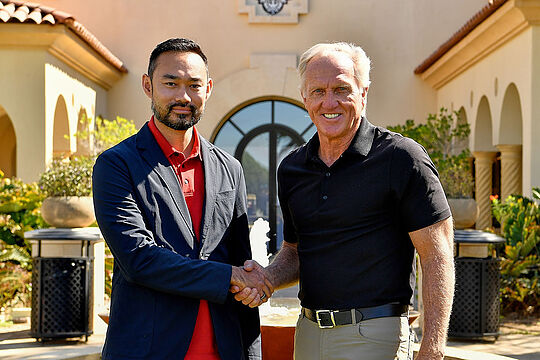 “We at LIV Golf Investments…we want to understand where and how do you unlock a sleeping giant, and the Asian Tour has been a sleeping giant for a long period of time,” said Norman, alluding to the PGA Tour, who have seemingly ignored the huge opportunities for growth in Asia over the past decades.

“When you put it into perspective, between the Middle East and the Asia Pacific Rim, that’s 45 per cent of the golfing market. That’s four and a half billion people sitting there with an opportunity for the game of golf to grow. 4.5 billion people to be given the opportunity.”

“60 per cent of all development today, golf course construction, is happening in the Middle East and in the Asia Pacific market. So when you see those opportunities, we as stewards of the game have to open those pathways up even more.”

Just as important are the opportunities for junior golfers. In many Asian countries there is a lack of infrastructure at the grassroots level and many can’t even afford to buy the basic equipment needed to play. But as South Korea has shown, especially in women’s golf, the talent is there, it just needs to be given an opportunity to flourish and the pathways laid.

“I’ve seen the growth and development of the game of golf through Asia, through the Middle East, in my homeland of Australia, in Japan. We’ve seen Japan have this meteoric rise in recent times because of what Hideki had done. Where did Hideki play? The Asian Tour. He won the Asian Amateur. There was a pathway for him to become the U.S. Masters champion.”

“So when you recognise these opportunities of the sleeping giant that’s sitting out there, the investment opportunities as a partner to come in and get involved with the Asian Tour and to launch what we have behind us, the International Series, is what I’m going back to in the beginning. It’s a great honour.”

The new International Series will include a stop at the Centurion Club outside London where $2 million will be on offer and a course that has previously played host to the Saudi-backed Aramco Teams Series on the Ladies European Tour.

Norman said the concept would also be shopped around in the US, which is where things could get very interesting — especially with the PGA Tour granting player exemptions.

“Healthy competition and respectful competition should be spread globally. That’s why we’re not going to geofence this, said Norman.

The partnership hasn’t been without its critics. Many in the golfing world point towards the questionable human rights record of the Saudi Kingdom and suggest that any player taking appearance or prize money is somehow condoning those actions.

While that’s up for debate and the same could be said for a number of countries hosting golf events around the world, the reality is that a star-studded field, including defending champion Dustin Johnson, Bryson DeChambeau, Phil Mickelson, Cameron Smith, Xander Schauffele, Marc Leishman, Lucas Herbert, Tony Finau and more are in the Middle East this week.