Norman: We want to win the Cup at home

Greg Norman has always been a ‘can do’ kind of guy over his career.

Always had plenty on his plate, seemingly enough energy for three lifetimes and more. In his early years as a professional, his huge appetite for practice and desire to be the best was well documented and as his career progressed, he added a business empire to the equation while not taking a foot of the pedal on course or at home raising a family. 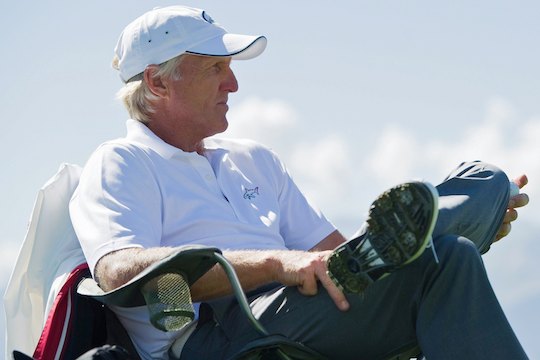 When he played in Australia or in other countries around the world at the height of his career, he would be playing a tournament round and then jump in a helicopter to fly interstate for a business meeting or appearance before returning in time to focus intently on his next round, and then do it all again.

Invariably, he would win the tournament as well, which was all part of the huge attraction and interest in him.

Fast forward to 2011 and the 56-year-old Captain of the International Team in the Presidents Cup continues to show that same desire to not do things by half measures, certainly never to only focus on doing one thing at a time.

As he approaches the task of leading a team into Presidents Cup battle on home soil at his favourite golf course, surely the preparations required for an event of this magnitude alone would challenge even his inexhaustible supply of energy and willpower?

Clearly not, as Norman has also entered both the Australian Open and PGA Championships, in the weeks before and after the Cup, and is back once again practicing hard to get himself ready to contend.

From his home in Florida, Norman was able to provide some insights into the challenge of the month that lies ahead.

Q: The Presidents Cup teams are picked and there is fairly even balance of youth and experience in both teams. Has watching the build up and final makeup of the teams been a different experience for you this time than in 2009?

Greg Norman: It’s been a very different experience this year. There are a number of really good players who are not on the team which left me with some really tough decisions for my Captain’s picks. It seemed a little tougher this year than in 2009.

Q: There are significantly more International players, and not just the Australians, with Royal Melbourne experience than the US team. The person on the US side who has had any success there is Fred Couples! How big an advantage is that do you think?

There are a few members of the U.S. Team that have played Royal Melbourne but at the end of the day, Royal Melbourne is a course where local knowledge is very important, and that might be a bit of an advantage because of the number of rookies on the team. My guys are really excited and you can feel a lot more energy this year as opposed to 2009.

When I get to Royal Melbourne I’m going to look at the golf course and see how the greens are putting and look at some of the pin positions that I know they will use. Then I will take this information and the local knowledge I have gained over the years and relay this to my team.

Q: Is there added pressure on the team that the Internationals are overdue for a victory?

Greg Norman: Sure I think that since the International team has not won the Cup since 1998, there is going to be a tremendous amount of pressure until we break through.

But the flip-side is that the President’s Cup is on the home soil for a lot of the players and it’s on a course that they know better than most of the Americans. We want to win the cup in front of our home country and we all know that the environment is going to be very, very enthusiastic.

I’ve spoken to every single one of my players. They are extremely excited. They want to get down there and win this thing.

Q: Your knowledge of the course under a variety of tournament conditions is unsurpassed. Have you been getting reports on how the course is progressing and what holes do you think will be key ‘match play’ holes on this layout?

Greg Norman: Yes, I get regular updates on Royal Melbourne’s condition, from two sources. The US PGA Tour sends me an agronomy report and I get feedback from member friends of mine via emails. All the holes are key in match play, especially with the high quality of players on both sides. You do not want to get behind in your match around Royal Melbourne, it is a tough course to push for birdies.

Q: The years that Adam Scott and Jason Day have had must have thrilled you, particularly Adam’s as he’s been on an upward trend since you picked him for the last Cup in San Francisco.  He strikes me as being a real leader this year and will be brimming with confidence in comparison to 2009?

Greg Norman: When I picked Adam as one of my captain’s picks in 2009, I knew the talent that Adam had and I knew he was going through some tough times on and off the golf course. But I knew his talent would overcome these things. Sometimes just getting a little boost allows you to open up a floodgate of competitive juices.

Was it that with Adam? Maybe, maybe not. But it allowed him to open up his confidence a little bit more and feel like he belonged. Now he has become one of the true leaders of this team. He is out there on TOUR talking to all of the guys and getting them excited about competing and winning the Presidents Cup at Royal Melbourne.

Q: Jason will be playing his first tournaments as a professional on Australian soil this year including his maiden Presidents Cup. What advice would you give him as he faces the pressures of wanting to meet his own expectations at home, let alone anyone else’s?

Greg Norman: I think Jason Day has everything it takes to be a superstar. I like his game, I like his demeanour and I like where he came from. From where he came from to where he is today, he has stayed very humble. He does not take it for granted and he has a tremendous future ahead of him.

Q: Obviously the anticipation of the Summer of Golf in Australia is reaching fever pitch. The Australian Open and PGA either side are attracting stellar fields, including yourself and Fred Couples the week before. Are you looking forward to the playing aspect of the three weeks or have the Cup preparations been all consuming?

Greg Norman: I am really looking forward to both playing and captaining the team. It’s been a while since I have played competitively and I really miss the competition of being on tour

I don’t always miss the practice hours that competitive golf requires but I do miss being in the arena and in the hunt. My health is good and I am excited to get back out there.

Q: Finally, the PGA at Coolum will be a great event this year with many of the Presidents Cup players backing up plus reigning Open Champion, Darren Clarke, making his first appearance in Queensland.

Did you see his victory as the ‘feel good’ story of the year so far, given the stage of his career and all he’s been through?

Greg Norman: Yes, I thoroughly enjoyed watching the Open Championship at Royal St. George’s this year and I was really happy for Darren Clarke, a well deserving champion who I’ve known for a long time. He played wonderfully all week and it made for a great story.

Q: Apparently he’s bringing the Claret Jug with him to Coolum too. As a past Champion, do you reserve the right to fill the jug with Darren with a little something at the end of this draining three weeks of golf?

Greg Norman: If the Claret Jug is there, then Darren deserves to be the master of letting others enjoy looking at it and experiencing the history of what it represents, which is enormous to say the least.

Whether Norman and Clarke do sit down in private at Coolum to sip from the Claret Jug or not, there’s no doubt the Shark deserves a moment to sit back with his feet up after this a three weeks of golf that will captivate audiences the world over.

If the Internationals can claim a second Presidents Cup victory for themselves and for Greg Norman in his home country, one wonders where that achievement would rank in Norman’s glittering career?