Hovland fired a closing round of 70 to hold off the fast finishing Martin Kaymer after the German posted a final round of 64.

Kaymer, the former world No 1 holed a great putt for birdie on the 15th and secured a four at the long 16th to join Hovland in a tie for the leaderboard, but his hopes of a first win in seven years were undone by a poor tee shot to the short 17th.

A bogey on the 17th left Hovland with a one-shot advantage heading into the final hole but he birdied the par-five to seal the two shot win. It is a maiden victory that came in only his 17th European Tour event start, matching the number it took him to win for the first time on the PGA Tour.

What’s In The Bag: Viktor Hovland

“There’s a lot of guys who played this week who I grew up watching,” remarked Hovland. ” It’s cool to be a champion of this Tour, in Germany, in a place that … it’s not in Norway, but it’s close and has some of the same feelings of being home. It’s a huge honour and finally Norway has a win on the European Tour.”

The 23-year-old has already won twice on the PGA Tour at the Mayakoba Golf Classic in December and the Puerto Rico Open in February 2020, and Sunday’s win moves him to a career high 13th on the world golf ranking. 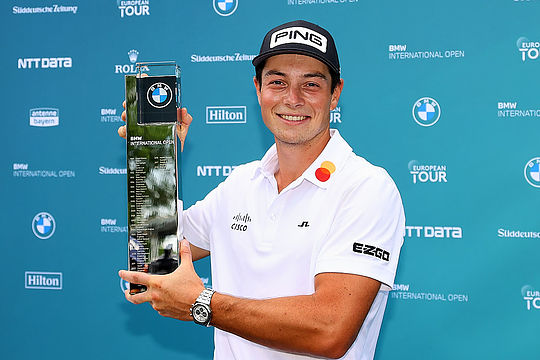 The much-touted Aussie rookie professional Elvis Smylie, who is being identified by many as the next best thing for Australian golf, failed to fire on a sponsor’s invite after shooting rounds of 76-75 to miss the weekend cut.

Smylie will need to rely upon another sponsor’s invite to crack onto the European Tour yet his opening tournament leaves plenty to consider, particularly the huge expectations that have been placed on this ‘next best thing’ and whether they actually need to be put there in the first place as opposed to just letting the young talent develop at his own pace.