The NSW team headed by Harry Bolton (pictured) withstood a stern challenge from St Michael’s on the rain-soaked Avondale Golf Club layout in a semi-final that could have gone either way and required extra holes to determine the finalist. 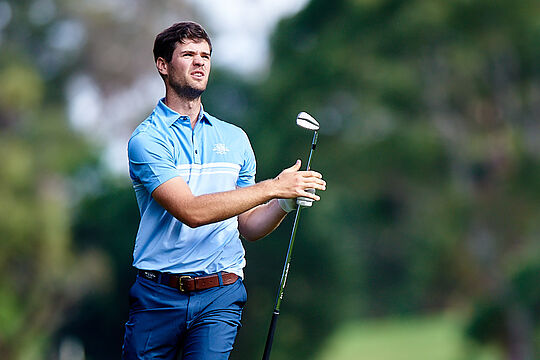 After the lower order for St Michael’s secured wins with Alex Radevski winning 1-up against Dean Van Kampen in the number seven match, Orlando Janschek defeating Jake Baker 5&4, and Jeff Pullen winning his number five match against Joe Trinder, 5&4, the upper order of the NSW team bounced back.

Zac Mullins playing number three for NSW accounted for Luke Furlong 2-up in a solid display of matchplay to get NSW first match in, with Ali Rachid accounting for Luke Ferlong, 2-up.

Jye Halls was too strong for Weiliang Wang, disposing the St Michael’s number two with an impressive 5&4 win.

With the matches 3-3, it all came down to the top-order match between Harry Bolton and Harrison Crowe.

The pair traded birdies throughout their encounter, both peppering the Avondale greens with precision iron play. Bolton had earlier gained a narrow margin over Crowe and on the par 3 16th nailed a mid-iron to less than a metre of the flag before making a birdie to win the hole to be 1-up with two to play.

The next hole Crowe bounced back with a win seeing the pair heading down the last all-square which was then halved forcing a sudden death extra hole playoff.

Bolton and Crowe headed back down Avondale’s first with both players finding the fairway before Bolton nailed his approach to a metre. Crowe also found the green but was not able to convert his birdie chance. Bolton then drained his birdie putt for the win.

Sydney’s weather has seen postponements wreck havoc on this season’s Pennants series. The final between NSW and The Australian is currently scheduled for August, after The Australian accounted for Bonnie Doon 5½-1½ back in March.